"Success, like happiness, is the unexpected side effect of one's personal dedication to a cause greater than one's self."  ~ Viktor E. Frankl

Sometimes we don't understand where a project will lead until we are in the midst of it all... 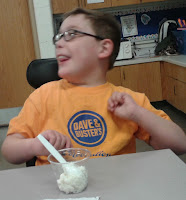 During the week, Cam enjoyed making homemade ice cream at school.
Chris and Jane don't recall making tasty treats in their own elementary school years and explained to Cam that classroom science experiments have come a long way!
We know this expert analysis led to a delicious snack which had to be enjoyed during class instead of making a trek home. 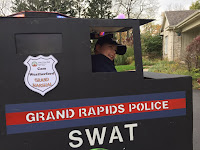 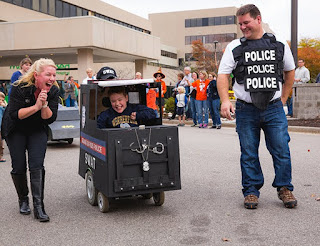 Our family community project "Halloween for the Rest of Us" was rounding the corner to its reveal and parade.  On Friday, Cam's parents headed to Mary Free Bed and checked up on the finishing costume touches with Molly Krauss, and new friends, Annie and Jim.

From the commencement of this joint effort between Mary Free Bed, the Weatherfords, Owen Ames Kimball and GVSU Engineering, Cam was asked to be the Grand Marshal for the big parade.
We had to explain the definition of this title to our son.  A grand marshal is an honorary title given to an individual by the organizing committee of a periodic parade event. Similar to guests of honor at fan conventions, a grand marshal is selected on any basis relevant to the theme or nature of the parade, and often leads the parade from the front.

We told Cam what an honor it was to be asked to lead this parade because of what it meant to the kids and families as well as each and every volunteer that helped create costumes for the kids.
Like every official parade, this event was led by a real marching band, direct from Forest Hills Central.  Not only did they march, but they expertly included some fun dancing too. 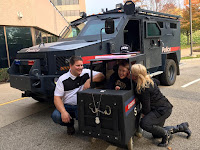 Cam was intent on his grand marshal duties and made certain he was keeping up with the band.  So many relatives and friends made their way to Wealthy Street to join in the celebration: Oma & Opa, cousin Coco, the Cornell fam cousins- Sam & Tom, Harry & Ollie, Aunt Joyce and Uncle Joe, Auntie Jo and Will, Anne and Amanda and Amanda's Papa, Mr. Ken, Ms. Kathy (Cam's teacher), Dick "Mr. D" (Cam's bus driver) and dog Molly, family friend Melinda and her relatives, Aunt Betsy's brother, John and wife, Kim.


There were over 100 people who joined in the parade around the long city block.  When we all arrived back at Mary Free Bed, a big surprise awaited Cam and all of the kids--- a real Grand Rapids Police S.W.A.T. vehicle!!  Sergeant Baker, who drove the vehicle, participated in the festivities on his day off.  Once again, others giving of themselves to create a priceless memory.
http://www.maryfreebed.com/halloween-for-rest-of-us-photos/

Every local news crew was in attendance for this inaugural event and our favorite reporter was Miss Tracy.  She spent the most time talking to all of the kids and asking questions.  Her story and video can be found online here:  Fox 17 Video & Story

As we celebrated dinner out that evening with Oma and Opa as a thank you for all of the extra help, Cam asked "Will I be a Grand Marshal ever again?  It was fun!"
It's impossible to pinpoint a favorite moment from this day.  The impact on the community and those involved, including us, won't be forgotten.

Cam's teacher regularly sends updates in email.  This week's entry:
Just so you know that Cam pays attention to everything...this afternoon he asked me where Mr. Shaw (the principal) was.  I told Cam he had been at a meeting all day and wondered how Cam knew.

Your blog is one of a kind, i love the way you organize the topics.,`:*~ best rated retractable tonneau cover