A Birthday for our Country & Chris - Week of July 4th

What does independence mean to you?  Freedom, celebration and self-governance come to mind.  Most recently, Cam has been asking for privacy to be by himself.  Sometimes, this is when he's content or at
times when he needs a break from everyone and everything...
and don't we all feel that way at times!
Becoming independent is a part of growing up and although Cam's independence is different from others, his thoughtful way of requesting it shows his parents that he has a good grasp of understanding his own feelings. 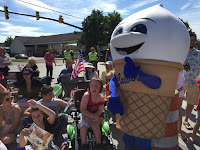 On Monday, Cam exercised his independence by participating in the Bike Parade which is always the leading entry in the Cascade Township Independence Day Celebration.  Our son was so determined in his parade duties, he would barely slow down for a photo op.  After the bikers and powerchair participators completed their trek, officers, fire trucks, local business floats and others paraded through.  A sheriff on a police motorcycle stopped to hang out with Cam for a picture.  That evening, we opted to watch some fireworks from the comfort of our front yard! 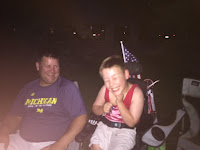 As if that day wasn't excitement enough, Michelle, who watched the parade with us, had big plans for the remainder of the week. 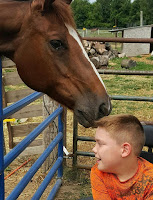 One of Cam's awesome bus drivers, Ms. Christie had extended an invite to her farm.  The animals took a liking to Cam as he and Michelle hung out with the horses, goats and chickens.

Ms. Christie even made a funny video to send to Cam after their visit.

From horsing around to splashing around, Michelle and Cam made their way to Millennium Park.

The six acre, man-made beach in the Grand Rapids vicinity hosts more than a dozen sprayers, buckets, splashers and other water features in the splashpad area.
On the humid, warm days that are not the norm in Michigan, getting wet in the sunshine seems to be the best activity around. 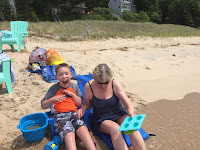 We celebrated Chris' birthday by taking out the best dad/husband ever to Olive Garden for an Italian dinner.  Cam had framed one of his favorite pictures of the two of them to give him and he was also given a certificate for a new e-reader of his choosing.

We were at Oma and Opa's on Sunday to see our family friends from Joliet, the Hueys, who gave Cam an early birthday present.  Gifts included an awesome bag of law enforcement goodies from the Joliet Police Dept! as well as a camping headlamp. 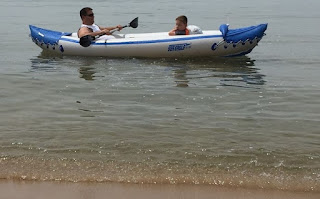 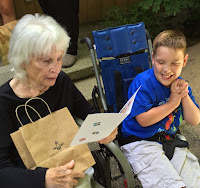 The remainder of the day was spent in the water and on the beach.  Cam had multiple kayak trips as we paddled out on the calm lake and plenty of "baking" time on the beach, creating different culinary delights out of sand with Oma. 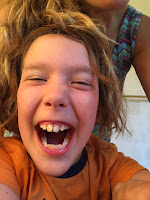 Cam also tried out a new look this week when Michelle draped her hair over Cam's head so he could see what he would look like.
Cam's response: "I look like a girl!"

We enjoyed a cookout with our neighbors at the Flegel home.  Chris asked Cam if he wanted to go downstairs and play pool.  When Cam realized what the "pool" was...
"I thought they had a pool to go swimming downstairs!"

Jane was trying to upload a video to YouTube for viewing elsewhere and was running into issues.  Cam was calmly explaining what the process was..
"First you get the video and send in email to the internet and then get it in YouTube..." (at this point, Mom stops listening and her son definitely notices...)
"Mom- listen to my instructions please!"
Posted by Special Moms at 9:57 AM