Cam endured a bout of stomach flu this week which thankfully, only lasted 12 hours, but it did take him out of school and at home for an extra day.  By the time Friday arrived, Cam was more than ready to head back and not miss his Valentine party.

At school, he created an "I love" poster and relayed the 4 things he loves most are friends, parents, peace and broccoli. As a side note, buddy Emma was quite surprised by the broccoli heart!

The school parties and goodies provided by friends and teachers was quite a big load to bring home.  Upon arrival back at the house, Michelle was waiting for Cam with another treat bag as well as a sweet Valentine's balloon.

'Auntie' Karen had made her way to Grand Rapids from the Chicago area amidst some crazy snowy weather.  We were so happy to have her with us for an extended time!  She and Cam worked on some crafting projects and somehow we need to entice her here for every holiday since she's so gifted.  All of us had a fun swim at the Y over the weekend.

Chris and Cam surprised Jane & Karen with some gorgeous bouquets of roses and flowers for Valentine's so the girls returned the favor by cooking a special dinner. The feast included some handmade place mats (compliments of the crafty one!) and a special over-sized Hershey kiss for Cam!

To round out V-Day festivities, Anna came over to see Cam while on break from Hope College.  Ever since Anna left for higher education, Cam asks what she is doing, how she is, when she is coming home, how to get to Hope College, among other important questions.  He was very excited to see her and give her a V-Day treat!

Many thanks to family and friends who sent cards and greetings to Cameron and his parents- all were greatly appreciated and still reside on the table.
With all activity around crafting and cards, Cam asked about the history of Valentine's Day cards so Jane did a little research.

Valentine greetings were popular as far back as the Middle Ages, though written Valentine’s didn’t begin to appear until after 1400. The oldest known valentine still in existence today was a poem written in 1415 by Charles, Duke of Orleans, to his wife while he was imprisoned in the Tower of London following his capture at the Battle of Agincourt. (The greeting is now part of the manuscript collection of the British Library in London, England.) Several years later, it is believed that King Henry V hired a writer named John Lydgate to compose a valentine note to Catherine of Valois. 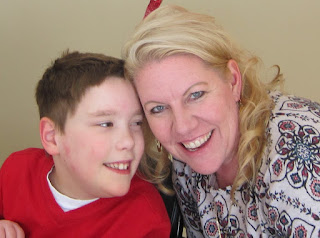 Americans probably began exchanging hand-made valentines in the early 1700s. In the 1840s, Esther A. Howland began selling the first mass-produced valentines in America. Howland, known as the “Mother of the Valentine,” made elaborate creations with real lace, ribbons and colorful pictures known as “scrap.” Today, according to the Greeting Card Association, an estimated 1 billion Valentine’s Day cards are sent each year, making Valentine’s Day the second largest card-sending holiday of the year.


Cam-ology Quotes:
With Cam's mild sickness this week, he and Jane talked about him waiting to eat all of his Valentine's treats until sometime over the weekend to be certain his stomach was ready.  Jane also emailed Cam's teachers to let them know of this plan...just in case.
Turns out she really didn't have to.

Teacher's Email to Jane: "Cam has taken your treat talk very seriously.  For lunchtime he told me he cannot have chocolate milk because his stomach may not be ready.  And he was very concerned what he ate for his snack.  He passed on a special Valentine cookie and settled on popcorn!"
Posted by Special Moms at 1:40 PM