Getting in the Groove - Week of Sept. 14th

The second week of school proved to be a bit more taxing than the first as Cam continued to become accustomed to his school routine again.
Thank goodness, though, his good mood usually prevails even on days when he returns home from 2nd grade pretty tired. 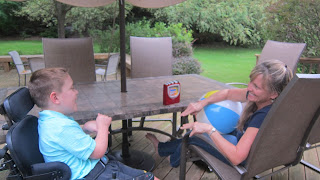 After school, Cam's time is split between Taylor and Michelle to hang out on while Jane and Chris are still working.  Due to our unseasonably warm fall weather, Michelle and Cam took to the back deck to play games one day.  A popular favorite is Guesstures, whereby via talking and gesturing, you can make your partner figure out what you're doing.

A rarity for us was arriving early enough to Cam's baseball game on Saturday to spend some time on the League playground.  The sun was so bright while Cam was pretending to drive the car on the highway.  Lately, our inquisitive son has been asking directions for just about everywhere we go, but not in a vague way.  Cam wants to know exactly 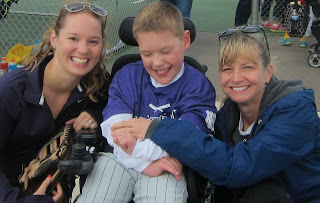 which highways, exits and turns one takes to get somewhere.  And he's been doing a fabulous job at remembering those directions.  Pretty soon, Jane may not need her GPS!

At Cam's game, he was wearing his official baseball pants and the announcer even called them out over the loudspeaker- "Cam Weatherford of Grand Rapids wearing his pro baseball pants today- those are major league style!"
Michelle joined us for the action to see her buddy Cam out in the field. 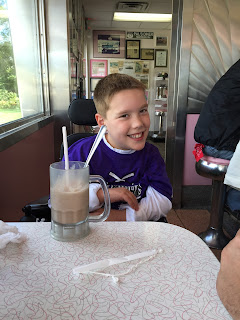 After an exciting game, what could be better than a lunch outing to Pals? (Pal's Website)  Pal's Diner was built in 1954 and was moved in one piece from Mahwah, New Jersey to Grand Rapids, MI  in 1993.  The entire move involved five states, three government approvals and a police escort for the entire 1638 mile trip.
Cam thinks they have the best homemade chocolate milkshakes around!  Shown here is one of their shakes split into 3 cups.  Cam agreed to split with his parents who are ever so thankful to have such a sharing son!

"Cam-ology" for this week: Thoughts From Cam

"Mom, what was your name when you were little?"
~Jane Elizabeth Harris Jellema~
"Mom, that's a really long name! How did you remember it?"