While the weather remained mild, Cam's first cold came on full force during the week.  After a couple of nights of interrupted sleep and a day home from school, the weekend brought the promise of fresh air and outdoor activity. 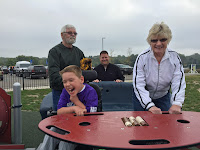 We arrived at the ball park early and with time to spare, headed over to the playground.  Oma and Opa met us there and had never experienced the "sway away" area.  While you stand or sit and hang on, someone else (Chris in the background) pushes on the contraption to provide the swaying motion.  Luckily, no one ended up seasick from all of the rocking! 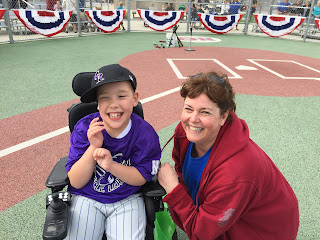 The ballgame was exciting and the helpers were from Merrell Corporation, headquartered in Rockford, Michigan.
Ms. Julie was Cam's buddy and they had a most hilarious time in the outfield trying to figure out which hits would go up to the sky and which would be grounders.  It was easy to see these two enjoyed a special connection right away. 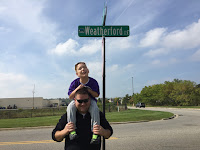 After the game, Cam and his parents and grandparents headed out for a tasty lunch together.  Before heading home, Chris remembered there was a pretty cool street sign nearby. 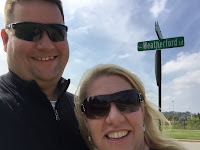 On Sunday, our Weatherford family drove to Kalamazoo in the late afternoon.  We were scheduled for a short photo shoot.

Following our session, 'Auntie' Amanda and her kids, Sally and Henry, were ready for their pictures.  Amanda's dad, Don and Mary Kay also arrived to help out.  Not only did they come to assist, but they also brought freshly picked pumpkins from their farm.  One was for Amanda's family and the other was for Cam.


Don asked Cameron if he wanted the enormous pumpkin. 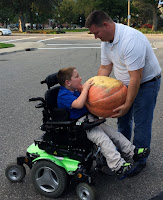 Cam-ology response:  "I don't think this pumpkin will fit in my house!"
We explained that the oversize piece of fruit would stay outside on the front porch.

It was a short visit, but it was so much fun to see Amanda and the kids, as well as Don and Mary Kay.  Many thanks for the biggest pumpkin the Weatherford family has ever had the privilege of displaying in front of their home!
Posted by Special Moms at 9:35 PM