Back to School & Back to Baseball - Week of Sept. 7th 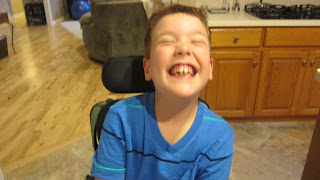 Cameron's 2nd grade school year began on a bright Tuesday morning, the day after Labor Day.
Cam made certain his parents had remembered everything for his first day and couldn't wait to get back on the bus with his driver from last year, Mr. "D" and get to his elementary school.
With new teachers in place and new friends to greet, we had one tired kid by the end of the week. 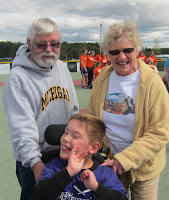 Luckily for Cam, his baseball game wasn't slated to start until 12:30p on Saturday.  This fall, our favorite player is on the Colorado Rockies team.  One of Cam's buddies, Carson, from his Wellerwood preschool days was also on his team, along with another classmate, Gerrit, from his current school Meadow Brook.  The cheering section this week included Cam's grandparents, ready to root for their grandson.  The helpers on the field were from the Women's Hope College softball team.
After the game, we headed out to lunch with Oma and Opa.  Many thanks to them for making the trek in for the game- so happy it was such a perfect weather day for baseball! 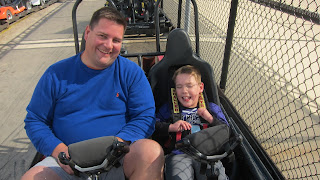 Cam's Saturday fun wasn't over yet.  Buddy Will's 7th birthday party was still to come.  Before it started, there was just enough time to take in a few laps on go-karts at AJ's Fun Center.  This was Cam's first trek around the race track and Chris' idea to squeeze more fun into the day.  And what a great idea it was!  Jane even hopped in her own race car to speed along next to her boys.  Cam wanted to go one more time, but we all decided to save it for another day.

Will's party was held at a miniature golf course, where Auntie Jo set up a round of golf for the group of boys.  She then ordered pizza and breadsticks (Cam's favorite party menu!) after the kids finished up their game.  It was quite an action-packed day for the second grader, who decided to bow out of the party a little early.  A big happy 7th birthday to buddy Will and a big thanks to Auntie Jo for all of the treats and fun!
On Sunday, the Weatherford fam headed up north to see Oma and Opa and cash in on one of Cam's own birthday treats- a trip to Dog-n-Suds in Montague, Michigan.

The location was founded by a Montague school teacher in 1963 who ran the Drive-In in the summer months. It was purchased by the current family in the fall of 1965, and re-opened in the Spring of 1966. In our second generation of management, the facility was totally rebuilt during the winter of 2000-2001. In its current configuration, the Drive-In is open each summer from April thru September.

After a tasty lunch with Oma and Opa, we headed over to the Schulze cottage where cousin David, his dad, Uncle Rod, and many other cousins were having lunch with our Schulze family.  Uncle Rod is quite a storyteller and poet.  He had Cam smiling and laughing from the moment they met. 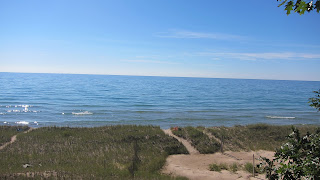 We spent a bit of time with Cam's grandparents at their cottage too.  Cam requested a piano lesson from Oma on her fancy electric piano.

Our Lake Michigan looks so pretty and peaceful this time of year, even if it is a bit chilly for swimming.
Posted by Special Moms at 4:58 PM