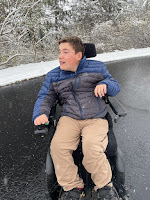 "There's nothing like that first snow.  Soft as a cat scruff and bleach white, so bright you can almost see your reflection in it." ~John David Anderson

Growing up in Michigan, Cameron knows the weather can change quickly.  We often talk about how local meteorologists anticipate the first big weather event of the season.  The excitement kept growing as did the expected totals of snowfall in Grand Rapids.  By mid-week, it looked as if the forecast may actually come to fruition. 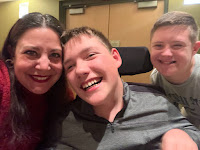 By the time school was finished on Thursday, the snow began to fall more quickly and with more purpose.  As we watched the local news that evening, schools were already closing.  A little after 11pm, Forest Hills Northern joined the others for Friday's snow day.

Chris made it to work Friday morning, but was home by lunchtime.  For his first official snow day of November, Cam helped his mom make Oma's turkey tetrazzini recipe and we continued to see the white stuff drop from the sky.  That evening we watched the movie "Unaccompanied Minors" centered around a group of teenagers stuck in an airport on Christmas Eve due to a snowstorm... how ironic!  Cam loved all of the shenanigans and we enjoyed a good laugh. 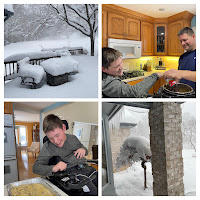 Saturday's haircut for Cameron had to be rescheduled as the outdoor snow globe persisted in our local area.  It was impressive to witness layer after layer continue to climb.  The lawnmower Chris and his son converted into the snowblower saw plenty of action as Cam's dad cleared our driveway a few times.  The guys cooked up their famous homemade chili in the afternoon and we made cornbread to accompany the chili for dinner.  Being stuck at home was made better by choosing another movie that evening.  Cam had wanted to see "Gigi and Nate" when it arrived at theaters in September.  Since we hadn't seen it on the big screen, we found it for rental on a streaming service.  The flick is based on the true story of a quadriplegic and a capuchin monkey.  It was the first movie Cam had ever seen that depicted someone in a powerchair and using a ceiling track.  He couldn't believe it!  Throughout the viewing, Cam commented about similarities and differences.  Our conversations continued long after the movie ended. 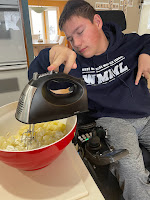 Sunday morning, we busied ourselves peeling almost 20 potatoes, chopping them up and boiling them. Cam had signed up to make mashed potatoes for his class Friendsgiving, scheduled for Monday.

After lunch, the snow had stopped falling and we decided our cabin fever had come to an end.  We drove to Montague and oddly enough, our 10 inches of snowfall in Grand Rapids amounted to less than 2 inches at the lakeshore.  The clear roads were welcome and after we gathered a few things at our cottage, we settled in at the Haroldsons.  Our turkey tetrazzini made the trip and our early dinner was accompanied by fresh fruit, warm bread and a salad.  Coco made the most delicious homemade peanut butter bars we had ever tasted.  The shining sun made for an impressive sunset.

We settled back into the van for our trip back to Grand Rapids since it was a school night.  During the drive, the conversation turned back to the movie once again.  We agreed it was refreshing to see the powerchair population represented.  One of our favorite quotes from "Gigi and Nate" was provided by the main character.  "We thought we were rescuing her.  The truth is, she gave us the one thing we needed most. Help." 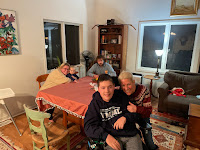 While eating our delicious turkey tetrazzini, Chris requested more "tetrazOnni" and Cam corrected him right away.