Getting Oriented - Week of August 8th 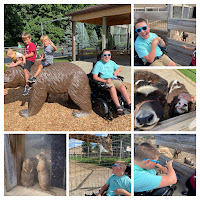 “Intelligence plus character- that is the goal of true education.” ~Martin Luther King Jr.
As we approached mid-August, the activities were kicking into high gear.  On Tuesday, Ms. Amanda and Cam went to meet up with Brooke and her kiddos at Boulder Ridge Wild Animal Park in Alto, Michigan. Previously, there was a tram (with a ramp for Cam's chair) that would take park goers on a safari ride.  With recent changes, Boulder Ridge opted to pave their former bus path to allow everyone to travel at their own pace.  Cam indicated he thought it was better with the pavement and enjoyed the time with the animals and new friends. That evening (Aug. 9th), Ms. Ann offered to hang out with Cam while his parents enjoyed a night out for their 19th wedding anniversary!  They dined at the downtown Real Seafood Co and enjoyed sitting outside at the JW Marriott afterwards.  A big thanks to Ms. Ann and Cam for making it such a memorable occasion.
Wednesday included a few more outings for Cam and Ms. Amanda. 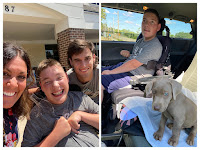 There was a visit to check on Amanda's new puppy, Otis, who took a liking to Cam.  Another stop to Chow Hound turned out to be a surprise encounter with one of Cam's favorite people, Ms. Rachel.  Rachel is the executive director for Brody's Be Café, and according to them both, Cam will be a future employee of the café when he turns 16 next year! 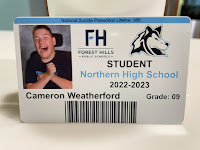 On Thursday, bright and early, Cam woke up before 7am.  Why so early? Because he was scheduled for Forest Hills Northern Hill School Freshman year orientation at 7:30am.  He arrived on time and listened to the instructions from his principal and other school leaders. Besides online forms and upcoming events, one of the most important reasons for attending the orientation was to have your school picture taken and obtain your official student id for the upcoming school year.  The photographer noted that Cam was definitely one of the happiest students he had met! 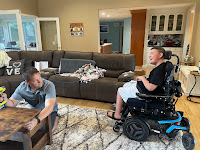 That evening Cam supervised furniture building for his dad as they worked to put together a coffee table for Oma and Opa.  The entire instruction booklet showed pictures with the letters of the different numerous parts.  Cam deciphered and called out the next steps to Chris.  As a team, they successfully completed the building task without any assistance from Jane, much to her delight. 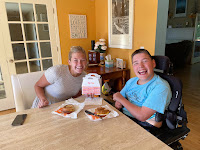 Friday marked Ms. Amanda's last official summer day with Cam.
She surprised him with a Dunkin' Donuts breakfast complete with a breakfast sandwich and munchkin donuts!  The duo had a fun morning and before we knew it, we were saying 'see you soon' to our Amanda when it felt like it was just yesterday that summer started.
Chris and Jane had the afternoon off of work, so they loaded up the van with the furniture to drop off to Rosy Mound for Oma and Opa. 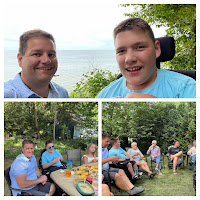 After a successful trip to Grand Haven, the Weatherford fam continued on their way to Maple Beach in Holland that afternoon.  At the original Jellema family cottage, Uncle Jon and Aunt Betsy, along with their four kids and their families were all gathered together.  The troops came from South Africa, Germany, Vermont and Illinois. 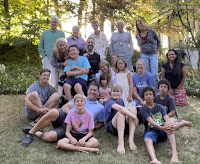 We don't see these cousins too often and it was so good to catch up, if only for a short time.  It was cool enough to sit around the outdoor campfire sharing stories and laughing about old memories.
Cam loves a good tradition and we hope this one continues for many years to come.

Much like the deer we often see in our backyard, sometimes the moment calls for some serene calmness.
Trying to pack in the outings, Jane asked Cam if he wanted to venture out to the local farm stand.  His response was perhaps one of a typical teenager...
"Mom, I've done a lot this summer...I need to relax!"
Posted by Special Moms at 7:30 PM