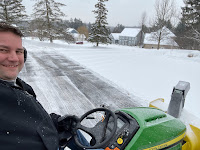 "The way to get started is to quit talking and begin doing." ~Walt Disney

As we entered into February this week, the temperatures remained chilly and the snow seemed steady.  Chris converts the lawn mower into a riding snow blower for the winter months and we are very fortunate Cam's dad is so handy. The break in the weather allowed Oma and Opa to arrive for a weekend visit on Friday.  Cam always checks to be certain we accomplish all of the tasks on their list.  Making homemade applesauce, financial reviews, Costco and store runs and delicious meals were all on the list.

With the Olympics starting this week, Cam requested that we record the opening ceremonies so he could see it too.  It turned out to be a super smart decision since the actual program only lasted for approximately 20 minutes.  We were able to fast-forward right to the portion we wanted to see.

On Saturday, Auntie Jo and Will arrived for lunch so we could celebrate a late Christmas.  It's a treat to open presents in February! We shared a meal and chatted while the boys played some games.  After our visit, the boys needed a bit of coaxing to take a group pic but gave in before Joanne and Will left.  That evening, we made a tasty surf-n-turf dinner with Oma and Opa consisting of flank steak, salmon, mashed potatoes and veggies. 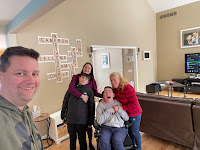 Sunday morning, Chris was off to the east side of the state to work all day.  After lunch, we bid farewell to Cam's grandparents and following their departure, Cam said he wished they could stay longer. 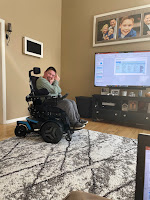 Jane had two work efforts looming and her son insisted on helping her tackle them.  Cam asked questions as Jane decided what she would say during her upcoming presentations.  As Cam continued to inquire about certain things, his mom became more motivated to finish the work.  As a team, they knocked out two presentations, three spreadsheets and numerous email responses in a span of almost four hours.  Jane couldn't believe how much they had gotten done and kept telling her son how thankful she was for his questions and input. When something seems so daunting, it only takes a positive presence like Cam to continue moving forward! Cam's dad has a great sense of humor and it has definitely been carried on by his son.  While Ms. Ann was tutoring with Cam, he completed a difficult series of questions.  Ann, being a former teacher, will assist, but never provide answers. Upon completion of an assignment, an automated grade appeared and Cam noted he had gotten a few responses incorrect.  He immediately looked at Ms. Ann, and jokingly remarked:
"And...Why are you teaching me?!"😁
Posted by Special Moms at 7:27 AM