It's fairly typical in any given week that a schedule change or modification of daily activities takes place. 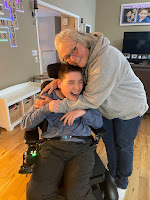 Ms. Ann was here in person on Monday and Tuesday for Cam's tutoring.  We knew we would only be seeing her virtually for the next two weeks, so they shared an extra hug prior to her departure.

Our biggest unexpected event occurred on Friday morning at 5:30am when we received the school closure notice for Cam.  Going to bed the night before, no one could have guessed the inclement weather headed our way.  As part of his day, Cam did complete a homework assignment showing a video of himself taking part in a household chore.  His chosen activity was transporting the laundry to the washer. 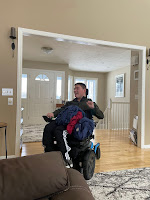 Early afternoon that same day, Ms. Amanda reached out asking if Chris and Jane wanted to head out for dinner while she stayed with Cam.  Since Amanda is a kindergarten teacher, her day was open as well.  Both Cam and his parents were happy with the unanticipated offer and enjoyed the time immensely. 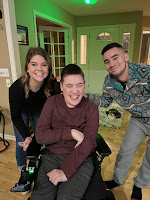 On Saturday, as a belated Christmas gift and "half birthday" for Cam, the Raisch family really outdid themselves.  We were able to surprise our son by keeping it a secret.  Right before 5pm, Steve and Patti, along with one of their daughter's, Sarah and her finance, Johnny appeared at our door.  Cam is always excited to see our dear friends and his elation grew when we explained that Sarah and Johnny were staying with him and picking up Culver's while Steve and Patti were treating Chris and Jane to dinner out at a restaurant.  The Cam group played Yahtzee and devoured their meal while the adult contingency had a leisurely dinner and stopped at Target on the way home. We watched the Superbowl on Sunday rooting for the L.A. Rams led by the Detroit Lions former quarterback.  It was an exciting game but due to the later start, Cam only watched for about an hour.  Although we told him he could stay up a bit later, he declared when it was time for him to begin his nightly routine.  He is still the most self-disciplined kid we know!

Last week we celebrated Opa's birthday.  We ordered him a new bathrobe from Amazon which arrived prior to the weekend.  Jane removed it from the packaging wanting to be certain it wasn't too long before wrapping it.  Cam watched in disbelief as his mom slid her arms into the robe (fully clothed of course) and he exclaimed...
"Mom, what are you doing? You have to wash it now! You just wore it."
Posted by Special Moms at 9:01 PM