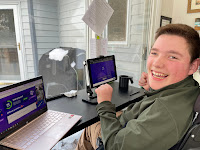 It was a long week in the Weatherford household.  Cam was feeling good but still had to remain home per the school rules which are in place to protect everyone.  We were grateful his teachers were able to zoom with him multiple times a day and he was still able to tutor with Ms. Ann virtually.  We were thinking about what we would do if we didn't have video technology so readily available.  Of course, we had to research how video first started.

AT&T developed a refined Picturephone throughout the late 1960s, resulting in the "Mod II" (Model No. 2), which served as the basis for AT&T's launch of the first true video conferencing service. Unlike earlier systems, in which people had to visit public videophone booths, any company or individual could pay to be connected to the system, after which they could call anyone in the network from their home or office. The inaugural video call occurred on June 30, 1970, between Pittsburgh Mayor Peter Flaherty and Chairman and CEO John Harper of Alcoa. The service officially launched the next day, July 1, 1970, with 38 Picturephones located at eight Pittsburgh companies. Among the first subscribers, Westinghouse Electric Corporation became Bell's largest Picturephone customer, leasing 12 sets. The following year, Picturephone service expanded to central Chicago and the suburb of Oak Brook, before expanding to other large East Coast cities. Customers peaked at 453 in early 1973. AT&T ultimately concluded that its early Picturephones were a "concept looking for a market." 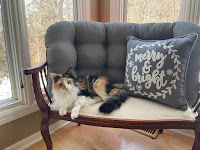 It's funny how the picturephone concept was replaced by the smartphone and computer video.  A teacher in Texas coined the term "zoomies vs. roomies" to distinguish between students at home versus students in the classroom.  As we counted down the weekdays, it was fun to see Cam's brain at work as he thought of journal entries and completed homework assignments.  All the while, he really did have the best attitude, knowing that the home restriction was coming to an end.  He requested the photo op of his cat, Stella, when she almost seemed to be posing. Since Cam was officially out of isolation on Friday afternoon and his buddy, Brody was as well, we set up a get together for the guys at the Weatherford household later in the day on Saturday.  Both boys felt good all week and symptoms were no longer in place.  To say they were both excited was a bit of an understatement...after only seeing their parents all week. First up was a movie with freshly popped popcorn to create a true theater experience.  The newest Clifford flick was chosen and we all declared it a good movie.  Next up was a high octane game of hide-and-seek, which lasted almost an hour.  Jane drove over to Culver's to pick up dinner and frozen custard, Cam and Brody's favorite!
After dinner, we played Kahoot as a group (online quiz game) answering trivia questions.  Then, we had lots of brain power at work during a few rounds of charades.  As both Jane and Brody's mom, Jenny have commented- "these boys are good for each other!" 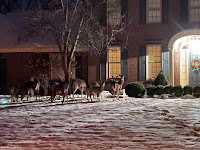 We said goodbye to Brody and noted this deer party in front of our neighbor's house giving credence to the popular phrase, 'birds of a feather flock together' or 'deer in a herd huddle and hover.'
Camology Quotes:
As part of this week's homework, Cam had to journal daily. One topic was to talk about a future job and what strengths you would bring to that position. Cam's entry is summarized here.
"I would like to work at Brody's Be Café.  I am kind and nice and helpful. I am a hard worker!"
Posted by Special Moms at 8:32 AM