"'Tis healthy to be sick sometimes."  "There is one consolation in being sick; and that is the possibility that you may recover to a better state than you were ever in before." ~Henry David Thoreau 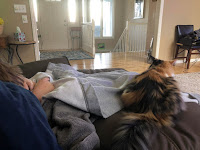 It's funny how you assume that if you are staying home and staying safe, you are immune to contracting an illness.  We have no idea how or from what, but Cam became quite sick on Monday.  Although he completed his walking routine, something was off.  Before he could even begin his homework, he didn't feel well and things steadily worsened throughout the day.  His stomach couldn't retain anything and he just felt awful.  Most of the day, he was on the couch, fiercely protected by Stella who chose to watch over him.  After a rough 24 hours, Cam was feeling more like himself and easing back into things.  By Wednesday, he declared he was feeling great again!

In the evenings, a new project had begun in the garage.  Chris and Cam have a new device to use called a CNC (computer numerical control) machine, recently acquired for project creation.
A CNC router is a computer-controlled cutting machine related to the hand-held router used for cutting various hard materials, such as wood, composites, aluminium, steel, plastics, glass, and foams. Instead of routing by hand, tool paths are controlled via computer numerical control. 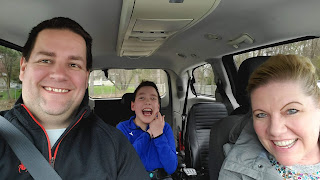 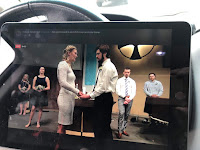 On Saturday, a very special event was planned.  Ms. Amanda was getting married to Mr. Nick!  Their large gathering was rescheduled for July but they still wanted to have their planned ceremony on their original date.  To help all guests feel connected, the couple set up a private Facebook live event.  As a surprise, a few of us gathered in the church parking lot to watch from our vehicles. 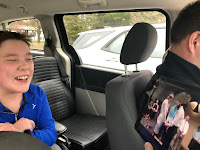 The current state regulations only allowed for 10 people to be inside the church, but we were thankful to be able to see and witness their vows.  As we waited for the newly married couple to emerge from the church, we talked about how awesome it was to be a part of it all, even if though it was virtual. 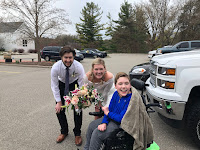 We decided to get out of our cars and stay by them so we could show our excitement for the Mr. and Mrs. when they walked out.  As soon as we saw them, the cheering began.  Mrs. Amanda spotted Cam and ran over to see him!  We snapped a quick picture before adhering to social distancing.  The most difficult part of the day was not being able to give our sweet Amanda big hugs. 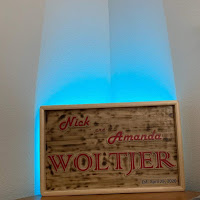 As a treat for the couple, we made some homemade goodies and decorated a box to put them in.  The homemade sign designed by Chris and Cam was our favorite gift to give.  They sent us a picture that evening to show how cool it looks in their new home.  A strip of remote-controlled LED lights was added to the back of the signage so that the happy couple can change the color whenever they wish. 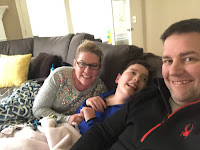 Saturday evening, our family sat together to watch a movie.  Although it is tough not to spend time with our friends and extended family, the silver lining has been the extra time spent with each other.  A quote found this week: "Attitude is the difference between an ordeal and an adventure."

Camology Quotes:
Cam prefers to follow all rules.  Chris enjoys joking with Cam.  One evening, Chris appeared in Cam's bathroom with a tape measure keeping himself exactly 6 feet away from Cam.  Cam asked what in the world he was doing.
"I'm social distancing Cam."
"Not funny when we are in the same family, Dad!"
Posted by Special Moms at 8:16 PM