Strange, isn't it? Each man's life touches so many other lives. When he isn't around he leaves an awful hole, doesn't he?  ~"It's a Wonderful Life" 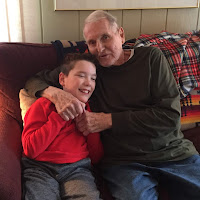 Cam has many aunts and uncles as well as extended family members known as Aunties and Uncles.  Ever since he was born, he has been fortunate to have grandparents. 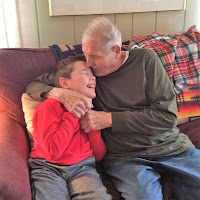 Our next door neighbor and good friend of 17+ years, Mr. Ken, has become 'Papa' to Cam and in every sense of the word, he has been a grandpa to our son.  Sharing dinners and events, joys and difficulties has been a part of our family friendship.
He was diagnosed with pancreatic cancer just last month.  We asked him what he wanted us to tell Cam about his health.  "Just tell him I'm sick and that's all," he said. 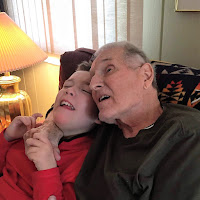 When we took Cam over the hill to see Papa on Saturday, we had no way of knowing it would be Cam's last visit with him.  We brought Papa the pictures from the Halloween parade and he talked about how great it was to see his buddy as the grand marshal.  Papa told Cam he was so special to him and would be forever.  He also told him he was his favorite 11-year-old. 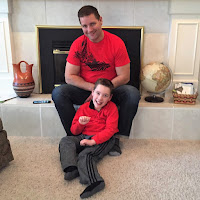 Papa gave our family the gift of his friendship and love and also brought us closer to his own kids and grandkids.
His children have become Cam's aunts and uncles and his granddaughter, Amanda, continues to watch over Cam after school and some weekend evenings.  It is because of Amanda that our son spent so much time with Papa.  Outings to Culver's and baking treats became a common occurrence.  Their bond continued to grow. 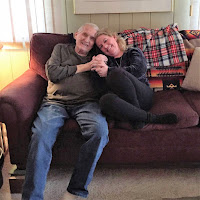 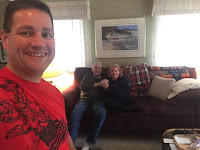 Ken is one of the kindest, gentlest, most humble men we have had the honor and privilege of knowing.  If you were with him in the community, someone would approach him with heartfelt greetings.  You could listen to him tell stories for hours of when he was a police officer, detective, unofficial neighborhood president, tour bus driver, painter, and the list goes on.  His favorite job was most definitely that of husband to Mickie (also known as Nina to the grandkids), father, grandfather and great-grandfather.

When we told Cam that Papa was too tired for another visit on Sunday, Cam asked "Can't Uncle Jim (Ken's son-in-law) just carry Papa to our house?"
Cam asked many questions about Papa and was processing what was going to happen and announced his own conclusion.
"Papa will be next to Nina and he will go to heaven."

Chris and Jane attended Cam's conferences at school on Monday.  We talked about what is being worked on, areas for improvement, and the positive aspects of our son's learning.
His teacher commented how kind he is with his classmates and others and indicated he is one of the kindest kids she's ever known.  We shared the report with Cam when we arrived home.
"Oh, that is so sweet!"
Posted by Special Moms at 9:55 PM