“I'm with you until the end of the line.” ~Captain America 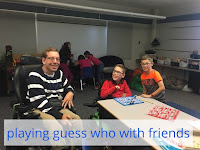 Cam was more than ready to return to school on Monday!  There was even a substitute teacher who just happened to be in a chair too, and the sub's chair went into the standing position.  Cam thought it was pretty cool and definitely wants a power chair like that in the future. 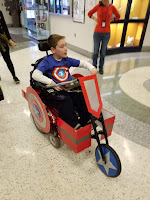 As luck would have it, Northern Trails 5/6 school was hosting Superhero Day on Friday.  This was Cam's opportunity to bring his Halloween costume to school since it wasn't able to make its premiere in the neighborhood or anywhere else due to his illness last week. 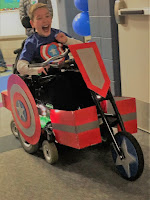 Chris arrived first thing in the morning to assemble everything and turn on the lights.  Cam's teacher said they knew it would be a cool costume but they didn't realize just how awesome it looked in person.  The students formed a human tunnel for Cam to go through and our kiddo couldn't have been more excited!  He told his parents how special it made him feel. 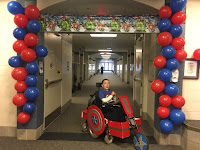 Even though it was well after Halloween, a parade of sorts still took place and the fact that our kiddo had chosen a superhero turned out to be the perfect choice. 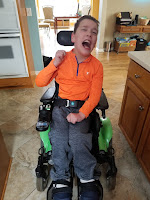 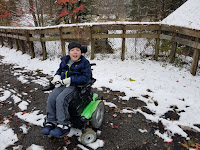 While Cam was celebrating at school, his mom was traveling to Miami for the wedding of Brandon and Eden.  Brandon and his family are very special to Jane since she babysat Brandon, Greg and Lauren for many years.  The weather was balmy and bright in Miami and simultaneously, the snow was flying back in Michigan.

Feeling a bit of cabin fever on Saturday, Chris and his son took a mile + stroll in the chilly weather.

When Jane's flight landed on Sunday, Cam's dad captured his reaction.  Even though it felt amazing to soak up the sun and be surrounded by love, there is no better feeling than being welcomed home by your family.

On Friday evenings, Cam and Amanda typically venture to a drive-thru and dine at home.  Usually, Culver's is the chosen restaurant.  However, Amanda was saying that she had been thinking about Chick-Fil-A and that is where they ended up going.  When asked why Cam changed his mind...

"Amanda kept talking about Chick-Fil-A and she made me crave it!"