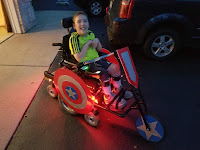 Don't cry because it's over, smile because it happened! ~Dr. Suess 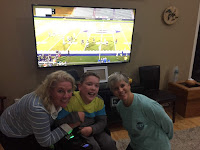 As we headed into our final week of project central for Halloween Heroes, we knew it would be a bit of a crazy week.  Little did we realize just how fulfilling it would be.

Our family enjoyed a spontaneous weekday meal with Patti and Emma to watch Megan play field hockey on the big screen.  It was televised through live streaming and Mr. Steve was there to watch in person.  Cam was amazed that Meg was on tv! 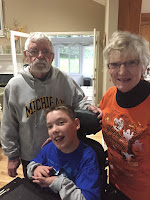 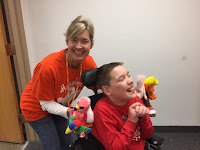 Friday was a half day for Cam, so Jane picked him up to work in the afternoon at Halloween Central in Mary Free Bed.  Volunteers kept arriving (thank goodness) to assist with our last three costumes (built in 1 day) and finishing touches on many others.  Miss Molly took Cam on a field trip in the main hospital to search for some stuffed animals for one of our costumes.  Amanda arrived to pick up Cam downtown and take him back home for dinner with Oma and Opa. Chris and Jane remained in place and busied themselves with a crew to move 28 costumes from one building to another in preparation for the big parade on Saturday.  With our own Halloween heroes consisting of Amanda, Oma and Opa, we made it through Friday evening and were ready to tackle Saturday. 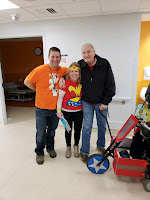 Rain was in the morning forecast and we were all hopeful for a clear afternoon.

The Kindness Club was a new addition to our 3rd Annual Halloween Heroes festivities.  This club consists of 5th and 6th graders from Forest Hills Central Woodlands school.  Their club leader, Judy, heard about our Halloween project and asked if her kids could participate.  We had no idea just how much their kindness was needed.  The Kindness Club created banners for all 28 paraders we had built costumes for.  They arrived 2 hours prior to the parade to read stories and keep our kiddos company, along with their families. 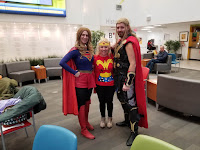 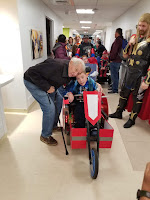 The Cosplay Crusaders also joined us for the first time, bringing two of their caped members- Thor and Supergirl.  Captain America had planned an appearance, but a scheduled wedding took precedence.

One of our family's biggest personal heroes, Papa, aka Mr. Ken found us before the parade to see the Grand Marshal and give him his favorite Halloween candy.  What a sweet surprise! 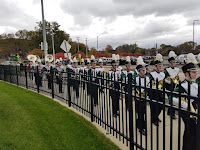 The Forest Hills Central Marching Band and all of its 120 members (one of whom is Megan Raisch) led us out into the overcast, pleasant afternoon.  Being inside, getting everyone ready, made us completely unaware of how many members of the community were actually outside. 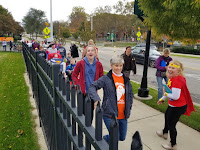 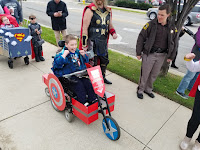 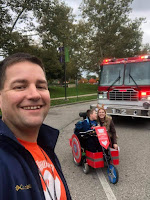 Each and every one of our parade participants was officially announced over a bullhorn by the CEO of Mary Free Bed Rehabilitation Hospital, Kent Riddle.  As Grand Marshal, Cam proudly followed behind the band.  So many came out to support us:  Amanda, her boyfriend Nick and his sister Brooke and their mom, Mary (with a Captain America goodie bag!) arrived in costume.  Aunt Mary and Uncle Ray, along with their son Mike, his wife Cheri and their son, Wendell lined the sidewalk.  Uncle Jon and Aunt Betsy couldn't believe how many people were there to see and celebrate our parade!  Cam's former teacher, Ms. Kathy and her husband Kevin surprised Cam and Patti and Emma even paraded along with us, cheering on the crowd. 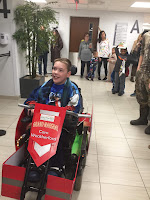 After we rounded the sidewalk corner, our costumed kiddos made their way in a back entrance to parade on the patient floors, while the band continued around the block outside. 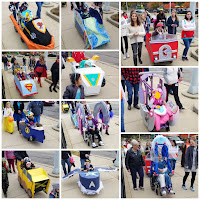 The kids were able to have their picture taken before heading back to the main lobby where the Grand Rapids Police Dept. officers were waiting with treat bags for all kids attending the parade.

It would be near impossible to capture all of the stories, moments and connections that took place because of Halloween Heroes. 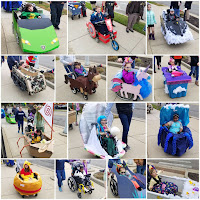 Just days before our scheduled event, our Superman kiddo suffered a severe seizure and his mom emailed Jane indicating that they may not be present for the parade.  Healing powers prevailed and Superman not only showed up but showed off his smile the entire time. 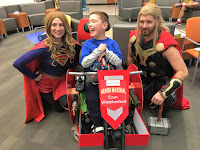 The countless volunteers that make this project happen continue to grow as friends tell friends and others bring their own family members to assist.  Chris and Jane need their own family and friends to extend time needed for this cause.  A special shout-out to Oma and Opa, Miss Amanda, Auntie Karen, Ms. Ann and Andrea Dennis for always going above and beyond. As we explained to Cam, "Sometimes, the most rewarding job in the world isn't the one you get paid to do, but the one you choose to do."
Halloween Heroes falls into that category, but more importantly, so does being a parent to our own hero, Cameron Jackson! 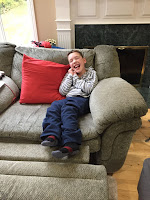 After the parade festivities, Sunday was a day to rest and look through all of the delicious candy Cam acquired at the parade.  After choosing a choice piece of chocolate, he only had one request:
"Mom, may I please sit on the Dad couch?"
Posted by Special Moms at 4:58 PM