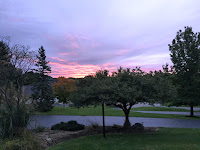 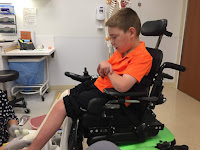 As the sun is rising a bit later this time of year, we've caught some pretty awesome hues in the mornings.
Every year in the September/October time frame, Cam has an appointment at Mary Free Bed to be fitted for new AFO's or Ankle-Foot Orthosis.  These braces keep his ankles, feet and legs in proper position for walking.  Cam is always patient and most cooperative during this casting process which is very precise. 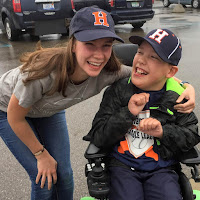 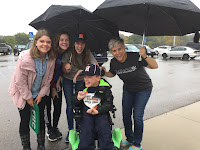 On Saturday, we had quite the line up of events planned- first, we were off to Cam's final baseball game for the fall 2018 season.  It was a bit drizzly on our drive over, but this turned out to be the biggest Cam-fan day yet!  First, Cam was surprised to see almost all of the Raisch girls!  Anna and Sarah were home from college and were accompanied by Emma and their mom, Patti.  Since Anna attends Hope college, she had to have a pic just with her buddy and their matching Hope logo hats. 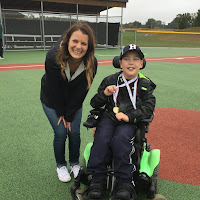 Home Depot volunteers were on the job and had a tent of hot dogs and treats set up for the players and their families and friends. 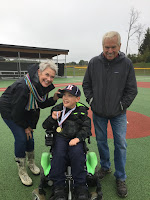 Also cheering for Cam on this rainy day were Aunt Betsy and Uncle Jon as well as Cam's teacher, Ms. Konkle.  Talk about one surprise after another!  Many thanks to all of our Cam-fans this season for coming out to cheer on our young ball player. 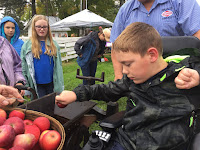 For our second event of the day, we were headed to a private fall festival at a farm in Ada.  We were invited by Mr. Paul to partake in treats and make homemade apple cider! 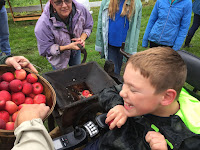 The best surprise of all- Mr. Paul had made a wooden ramp and platform just...for...Cam.
He wanted him to be able to see the apples go into the grinder to make the cider.  Paul has two apple presses on his farm, one of which is over a hundred years old. 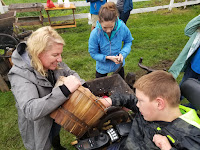 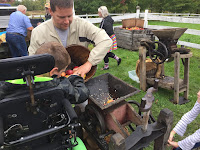 Step 1- you put the apples into the
grinder.  Cam deposited the first ones in.  Step 2- someone needs to churn the wheel on the side as it grinds the apples into bits.  A variety of the delicious fruit is used- reds, greens, yellows make a colorful smashing operation.  The apple bits fall through the grinder into an oak barrel lined with burlap.
Step 3- the barrel is moved forward underneath and the burlap cloth is placed over the top.  Now the apple pulp is pressed by turning a lever that pushes the press further down as the cider liquid is pushed out.

Step 4- strain into containers and you're ready to drink the liquid gold! 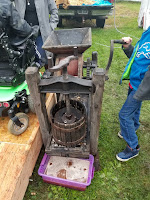 The wet, rainy day couldn't dampen anyone's spirits. Cam and his parents were very grateful to head home with a full gallon of apple cider.

After dinner, the weather was clear and much to our surprise, Cam wanted to see ArtPrize downtown since he hadn't been able to go with his class. 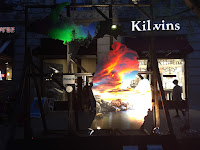 ArtPrize is an open, independently organized international art competition which takes place for 19 days every other fall in Grand Rapids, Michigan. More than five hundred thousand dollars in prizes are awarded each year, which include a $200,000 prize awarded entirely by public vote and another $200,000 prize awarded by a jury of art experts. Any artist working in any medium from anywhere in the world can participate. 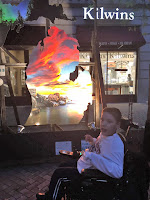 One of our favorites was "Michigan Effect" created by Tom Gifford, standing 10 feet high and made out of acrylic glass with two of his photographs showcased. From the artist's writeup: "I think of Michigan in two different moods. energetic and calmness, Energetic because when you take a trip to the U.P you have a sense of energy. There is so much to do and many so hikes to take. The U.P gives you the energy to move forward just like the Northern lights they give you the energy to stay up all night. Calmness because when you are in the lower peninsula there is relaxing beaches and beautiful sand dunes. There is so much beauty around you, There is nothing better then the days you lay in the sun at the beach." 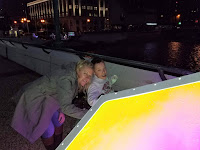 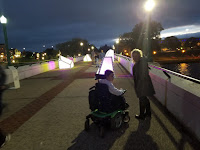 Another favorite was "Oscillation" which was an interactive installation on one of our downtown walking bridges.  Crystals inside the cubes formed different sounds as you moved around them.

Art is in the eye of the beholder and these beholders were pretty impressed!

Cam does spend a fair amount of time watching "tech" videos during his screen time and is always eager to help his dad and mom with technology issues.  Friday was picture re-take day and Cam graciously agreed to partake.  However, he was very concerned about previous proof of his school pictures.  Jane told him that the photos received were back in his folder.  Not surprisingly, this wasn't quite good enough for Cam.

"Mom, could you please search your cache of email and look for the confirmation and send it to my teacher?  Sometimes they don't have them you know!"

For those of you needing a definition...Cache, which is pronounced "cash" (not "catch" or "cashay"), stores recently used information so that it can be quickly accessed at a later time. Computers incorporate several different types of caching in order to run more efficiently, thereby improving performance.
Posted by Special Moms at 12:28 PM