"We didn't lose the game.  We just ran out of time." ~Vince Lombardi 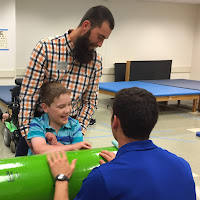 There are days when it seems you plan an agenda down to the minute.  Cam was scheduled for two Grand Valley sessions as well as an extracurricular visit to Mary Free Bed.  After morning chores and studies, Amanda and Cam headed to GV meeting #1.  It was a very productive session with the PT students, possibly influenced by the fact that one of the grad physical therapists was named Cameron too. 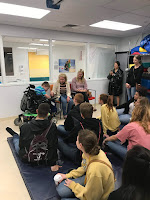 Next up was a trek to Mary Free Bed.  Jane met Amanda and Cam there with a picnic lunch.
A group of recent graduated high school students who expressed an interest in health care were spending the day touring Mary Free Bed.  One of Cam's PT buddies, Ms. Andrea, asked Cam if he and his mom would talk to the students about their therapy experience.  We entered a room where all of the kids were gathered and Cam asked them each to introduce themselves, which they all did.  It was a fun half hour as Jane and Cam asked questions and answered inquires.  Immediately following the MFB time, Amanda and Cam headed back to Grand Valley. 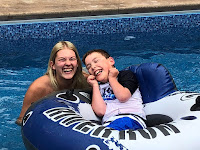 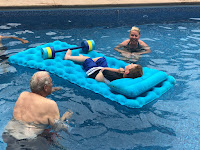 One evening, Amanda's Aunt Carol and Uncle Jim invited our family to swim in their saltwater pool.  Amanda's grandpa, Ken (aka Papa) was there too.
For Cam, it truly was an awesome experience because of the water floats Aunt Carol had.  Not only was he relaxed, but he felt secure and safe too in the buoyant toy.
None of us had been in a saltwater pool and we all decided it was far better than the typical chlorine variety.  Cam was most impressed that Aunt Carol could control the underwater pool lights with an app on her phone! 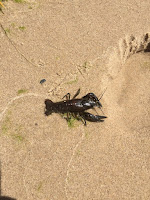 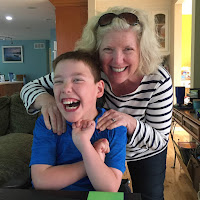 The weekend brought Auntie Karen in from Chicago to visit and spend time with our family.  Cam was excited to learn a new dice game called LCR (Left, Center, Right) that Karen taught us to play.  At one point, we lost one of the die and after searching for quite a few minutes, Jane asked Cam to back his chair up.  He began laughing and said, "can you hold this a minute?"  Turns out, the mischievous kiddo was holding one of the dice in his hand. 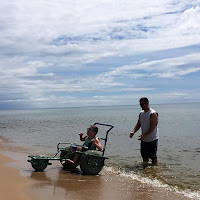 We brought Auntie Karen to the cottage on Sunday and although it was a rainy morning, the afternoon skies opened up to glorious sunshine.

A long walk on the beach produced a rarely seen crayfish on the Lake Michigan shoreline.

Cam enjoyed a kayak ride with his mom and expert paddler, Auntie Karen.  As they were coming in after a leisurely excursion, some afternoon boaters produced some rolling waves that sideswiped the kayakers with a rogue wave. 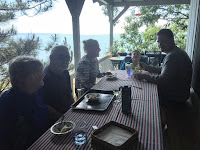 The afternoon beach activities came to an end late in the day.  The fun continued with a barbecue chicken dinner feast out on the picnic table.  Oma's homemade apple pie topped with delicious vanilla ice cream finished out our meal.
The events of the week left us feeling blessed and thankful for those who continue to give of themselves and their time- as we know, the most precious gift of all are memories made with those we love.

Camology Quotes:
Cam is a routine boy, in nearly every activity.  That also includes staying "regular" and most mornings after Amanda arrives, he completes his morning program.  On one such occasion, he announced to Amanda...
"Wow, it smells like a cow farm in here!"
Posted by Special Moms at 9:32 PM

Thank you so much Love your blog.. Are pool leaks expensive?