Bittersweet - Week of May 28th 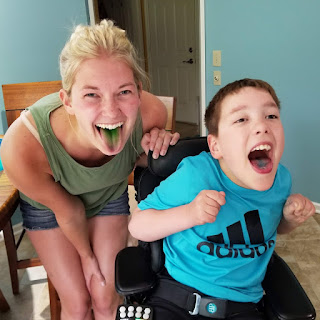 "It isn't summer until you eat your first popsicle!" ~ Amanda K.

Back in 1905, an 11-year-old San Francisco Bay Area kid named Frank Epperson accidentally invented the summertime treat. He had mixed some sugary soda powder with water and left it out overnight. It was a cold night, and the mixture froze. In the morning, Epperson devoured the icy concoction, licking it off the wooden stirrer. He declared it an Epsicle, a combination of icicle and his name, and started selling the treat around his neighborhood. In 1923, Epperson decided to expand sales beyond his neighborhood. He started selling the treat at Neptune Beach, a nearby amusement park. Dubbed a "West Coast Coney Island," the park featured roller coasters, baseball and an Olympic-sized swimming pool. Neptune flourished in the pre-Depression days, and consumers eagerly consumed Epsicles and snow cones (which also made their debut at Neptune). Buoyed by this success, Epperson applied for a patent for his "frozen confection of attractive appearance, which can be conveniently consumed without contamination by contact with the hand and without the need for a plate, spoon, fork or other implement" in 1924. The patent illustrates the requirements for a perfect ice pop, including recommendations on the best wood for the stick: wood-bass, birch and poplar. Eventually, Epperson's children urged him to change the ice pop's name to what they called it: a Pop's 'Sicle, or Popsicle. (full article) 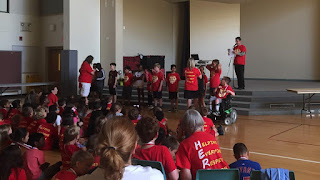 Amanda and Cam enjoyed their frozen treats immensely on a very warm Tuesday evening.  Ironically, they choose the color popsicle of the shirts they happened to be wearing that day.

Friday, however, was a bittersweet day.  The final LINKS (school program linking children of different abilities together) ceremony took place at Cam's school. LINKS is about creating connections within a diverse group of students and ensuring that all students are acknowledged for what makes them different and what makes them and all of us the same. 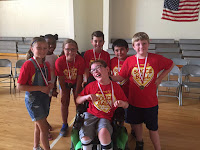 Each participant received a medal in the front of the gym, heard the principal say their name, and watched a cool slide show with lots of pictures from the program's past year.  Afterwards, in the very warm gym, Cam was feeling pretty sad.  When Jane asked him why, he said "because it's over" and his friends all assured them they would see him at the new school in the fall.  Cam explained, "I'm sad because I won't see all of my teachers."  For five years, he's attended the same school.  As he made his way back to the classroom with Ms. Kathy, he told her- "I'm sorry Ms. Kathy for being upset."  Ms. Kathy responded to Cam by saying, "Cam, don't ever apologize for feeling your feelings."
Saturday brought another finality as we attended the last WMML game of the Spring 2018 season.  This event, though, was a super happy one!  The surprises just kept on coming...
Uncle Jon and Aunt Betsy were waiting for the game before we even arrived!  Oma and Opa, Auntie Jo and Will appeared as well as Ms. Kathy and her husband, Kevin.
And then, all of a sudden, we saw Auntie Karen and her sister, Sue who drove 220 miles to see Cam's final June game!  Karen kept it a secret from Jane and Chris had only told Cam that very morning, but our son remained quiet about the impending visit.
The volunteers for the game were therapists and workers from Mary Free Bed Rehabilitation Hospital, many of whom already know Cam and quite a few of the WMML players.
The game went by much too quickly, but it's nice knowing there's another season to be played in the fall.  Cam has already informed us that he would like to play every single season until he is 18 (the maximum age for WMML).
Following the baseball festivities, we were grateful for yet another surprise- a picnic lunch provided by Auntie Karen and her sister, Sue.  Complete with an American flag tablecloth, we dined on delicious sandwiches, veggies, fruit and all of the fixings with homemade brownies for dessert.  Cam kept commenting how he had worked up an appetite, noting that he did have room for a chocolate treat. 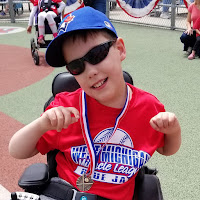 We cannot thank our Cam-Fan crew enough for making the trek to cheer on this kid with a heart of gold blessed with family and friends who are truly priceless!

Camology Quotes:
Saturday was quite busy and it had definitely been a long week.  Each evening, Chris and Jane take turns reading to Cam.  It was Jane's turn and after finishing the story, she and Cam were chatting about the day's events, when suddenly...
"Mom, I don't mean to be mean, but could you please leave now.  I am tired."
Posted by Special Moms at 3:44 PM