The Things You Catch at the Pier - Week of Aug. 7th 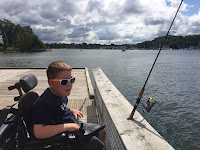 The charm of fishing is that it is the pursuit of what is elusive but attainable, a perpetual series of occasions for hope. ~John Buchan

If people concentrated on the really important things in life, there'd be a shortage of fishing poles. ~Doug Larson

It was a week of new experiences for Cameron Jackson.  His swimming lessons every Monday evening have increased his stamina with each session.
Ms. Laura has been working with him to incorporate more leg movement to strengthen his muscles since the hip surgery.  The Mary Free Bed therapy pool is virtually empty when their instruction takes place, so it's a targeted 45-minutes. 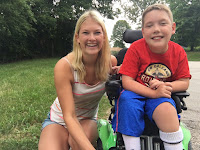 Cam and Ms. Amanda continued their daily walks, increasing their distance to almost two miles.  Their summer routine has consisted of morning Vizzle work (shout out to Ms. Kathy @ school!), reading practice and then their mid-morning trek for exercise.  Ms. Amanda always finds a way to wrap some fun activity into the day as well. 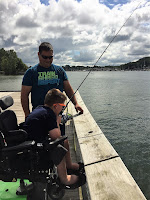 The weekend arrived and so did some rainy weather.  As we made our way to Holland State Park, we had no idea what awaited us.  Even though the skies were cloudy, we continued on, ready to teach Cam how to fish at the channel. 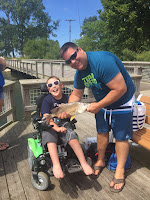 Chris and Jane both enjoy fishing and they hadn't had an opportunity to take their son.  Our family found a parking spot and the sunshine prevailed as we made our way to find the best spot.

Shortly after we arrived, Mr. Steve appeared indicating his girls would be along soon.  We switched locations and settled in at a bench alcove adjacent to the boardwalk. 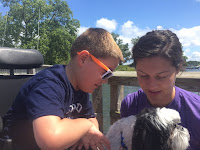 All of a sudden, the fishing line bent over and Chris worked to haul in the catch.  We weren't sure how big the fish would be and Cam's dad almost toppled over his son bringing the sheepshead fish in for a photo shoot.  The swimmer wasn't the type you would keep or even eat, but it was a big one and hilarious to see Cam's excitement watching one be captured and then released.

Ms. Amanda, her boyfriend, Nick and his sister, Brooke, parents Mary and Dan and dog Gizmo all showed up at the boardwalk as well.  And they arrived with a huge early birthday present from Ms. Amanda and Nick's entire family.  Cam couldn't believe it! The beautifully wrapped present was adorned with his favorite chocolate coins, and a card from everyone. 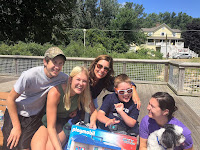 Luckily, Mary captured the moment of Cam opening the awesome gift on video.

The day was filled with the bright sunshine of a perfect Michigan summer afternoon, the warmth of meeting new friends you feel like you've known for a long time, the goodness of seeing your close friends/neighbors in a different location, and a whopper of a fish story to share over and over again. 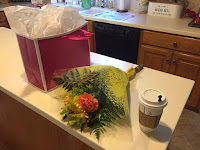 This week, Cam's parents celebrated their 14th wedding anniversary.  Chris had to stay overnight for work on the east side of the state and set up a surprise for Jane since he would be absent.  He conspired with neighbor Sarah to have her hand-deliver a present, card, bouquet and Starbucks on the anniversary morning.

"Mom, how did Dad do that?"
He asked Sarah before he left.  Your dad is the sweetest.
"That is so cool, Mom!
Posted by Special Moms at 1:32 PM