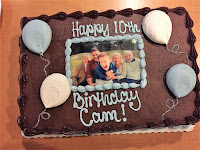 Surprise is the greatest gift which life can grant us. ~Boris Pasternak

Has there ever been a time when you thought you knew what was going to happen, but it ended up being even better than you imagined? 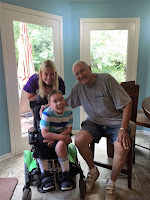 It seemed as if each day held a treat this week, not necessarily to be eaten, but definitely one to be savored and enjoyed. 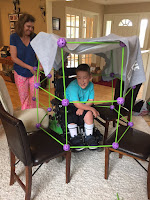 Cam and Amanda were chosen as professional painter assistants when Papa Ken insisted he paint our kitchen after receiving some technology help from Chris.  We now see bright blue where there once was 'boring' beige.  Lake Michigan water will surround us all year round. 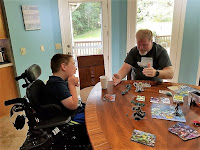 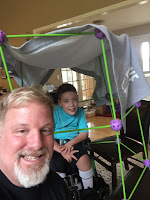 On Tuesday, we welcomed 'Auntie' Leslie from North Carolina, and on Wednesday, her boyfriend, Mr. Jay from Georgia.  These two ascended for their 30th high school reunion with Jane.  They were forewarned that it was Cam's birthday week and surprises were in store.  We couldn't have guessed that they had hidden gems as well for Cam.  Auntie Leslie brought Crazy Forts, a kit of plastic rods and styrofoam inserts, an assembly for easily creating awesome forts inside the house.  The idea came from witnessing Emma and Cam enjoy many different fort creations over the years.
Mr. Jay is a master board game aficionado.  He presented Cam with the game, King of Tokyo.  It became an immediate family favorite and we were all a bit startled by Cam's ambitious, daring Tokyo plays. 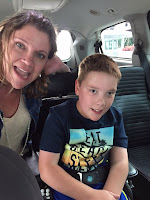 Thursday was Cam's actual 10th birthday.  Our inquisitive son had guessed that he was going to Craig's Cruisers.  After all, he had asked over a month ago and yes, he remembered the request. However, he had no idea what is in store.  Our first surprise was a morning of rain, actually a downpour.  Regardless, nothing was going to damper the day.  Oma and Opa arrived shortly after 10am marking the first official bday surprise. 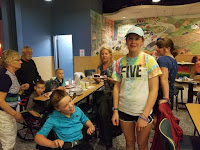 As we all traveled to Craig's Cruisers, Cam had no idea what awaited him.  Upon arrival, we were all given a wristband/card for 3 attractions (go-karts/bumper boats) arcade games and buffet, due to a pre-purchased birthday package.  Cam didn't realize he had a birthday package and was also unaware that 3 of his best buddies would be in attendance as well.  Brody, Emma and Liam all arrived with a parent ready to celebrate!  Brody and Cam have been at Meadow Brook together since kindergarten.  Obviously, Brody nailed the iTunes gift card for his buddy.  Maybe Cam was beyond excited in this video because he's been aggravated by endless ads on one of his favorite games.  Jane kept commenting that he would need to earn money or ask for a gift card to purchase the no-ad version.  It was a wish come true for the birthday kid.  The rain stopped outside and that meant outdoor go-karts and bumper boats became available attractions. 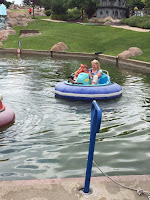 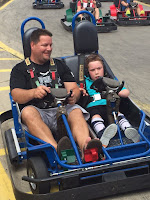 Oma and Opa had picked up a delicious chocolate birthday cake from our favorite bakery, Ryke's, on their way into Grand Rapids.
When you have a celebration equally fun for adults and kids, it's tough to say who enjoyed the day more.  Cam's parents were told by the majority of adults present that it was the best birthday party they've been to.  As an added bonus, each and every person in our group gave their earned "tickets" from the arcade games to Cam as an extra added bonus. 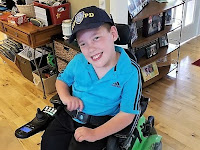 Back at home, Oma and Opa graciously spent the night and their ten-year-old grandson enjoyed opening presents from his grandparents including a national park quarter album, school clothes, books and a toy ice cream truck.  Grandma Sue sent a homemade blanket and book of puzzles.

One of Jane's good friends and colleagues sent an NYPD baseball cap and stocking hat. 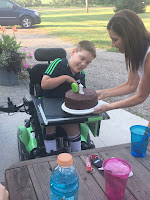 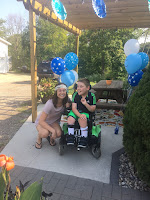 You would think once one's actual birthday has passed, the festivities have as well.  However, there was one more planned and it didn't involve Cam's parents.  On Saturday, the adult crew in the household were headed to the high school reunion.  Ms. Amanda arrived to spend the evening with Cam.   She and Cam ventured over to the Woltjer family home (Amanda's boyfriend's fam) to partake in a special party given in our 10-year old's honor.  A delicious dinner, homemade chocolate cake and balloons were more than enough to blow this kid (and his parents) away!
Brooke, pictured kneeling with Cam posted this awesome tribute: celebrated this dude's 10th birthday tonight! Cam, even though we have only known you for a short time, you have become so special to us and have brought us crazy amounts of joy!

It was a week of renewed friendships, unexpected gifts and one sweet surprise after another.
Our infinite love and thanks to you all!

Camology Quotes:
Trying to keep Cam's birthday activities quiet was a challenge, especially when the questions kept coming and coming..
Mom, are you going to get me a cake for my birthday?
Do you want a cake?
Yes, you should always have cake on your birthday. It is important. You had a cake, Mom.

With Cam's ticket winnings, he was able to pick out some wonderful, cheap gifts.  He asked what the whoopee cushion was.  Jane told him it was a cushion that tooted.  Upon arrival home...
Where is my Toot Pillow?