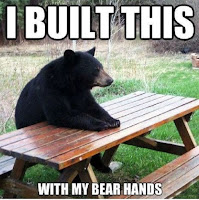 When Chris suggested that he & Cam build a new picnic table for the cottage as a present for Oma & Opa (their anniversary was July 1st), Jane had no idea what it would entail.  The boys had never built a table, but that wouldn't deter Cam's dad, always ready to take on a challenge..no wonder his son has the same attitude! 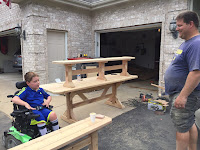 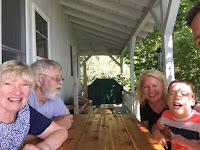 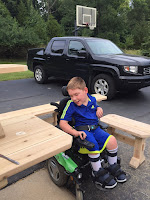 After taking measurements of the cottage deck and existing table, we all agreed on a new design. Chris picked up cedar wood, Cam wore his headphones and the two got to work.  Cam's job was to check to be certain his chair would fit underneath the table and supervise his dad.  Chris needed his son's expert assistance to find all of the screws so wood putty could placed over them to blend in with the wood.  After 2 weeks of evening and weekend work, the picnic table was completed.  Due to its 8 foot length, it was expertly secured in the back of the Honda Ridgeline to travel to its final destination- Oma & Opa's deck. 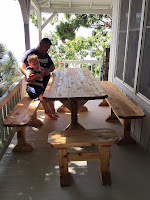 The existing picnic table is nearly 50 years old and a testament to good construction.

When the replacement was revealed, Cam's grandparents were very excited!  Opa was surprised to see a separate bench for him at the head of table, opposite of where Cam sits.  The custom crafting, unique design, and multiple coats of linseed oil have us all hoping this piece of furniture lasts as long as its predecessor. 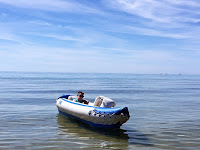 We finally enjoyed some rare, calm Lake Michigan waters as our family kayak had a good workout.
Some cool kid was hanging out in the inflatable boat solo for a bit.  And, we even convinced Oma to take a boat ride in the calm waters. 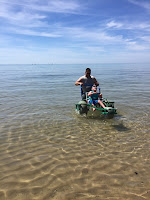 The famous Cam-mobile went touring through the lake as well, bouncing up and down splashing its occupant.  The water was incredibly clear and the sun reflected the bottom so one could easily spot large minnows, rocks and even a stray golf ball. 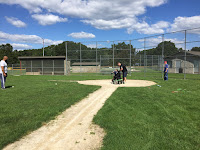 The Annual Cousin Baseball Game is an event we look forward to every year.  Cam's cousin, Harper, came up with the idea years ago and he is now an avid player himself.

We try to make it as official as possible with a boatload of snacks, sodas, and even the national anthem itself before the opening pitch. 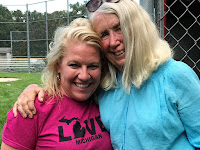 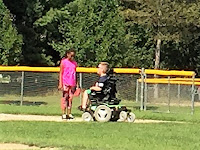 The best part is watching the kids at bat and in the outfield, guarding bases and figuring out that batting is really the coolest thing ever.  There is a team roster and we do play on a real baseball field complete with bases and dugouts.  Cam and his sweet cousin, Maya, hung out at first base together waiting for the next swing.  The favorite quote of the day, "when am I up to bat again?" echoed by several cousins. 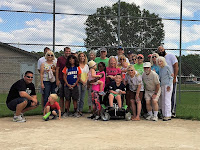 After a couple of hours and numerous innings (we may or may not have reached 9), the sun was warm and bellies were beginning to grumble.  After our group picture, most of players and spectators headed to Fricano's in Muskegon.
Fricano's pizza remains the original and most famous pizza and pizzeria in Michigan. In 1949 the late Cosimo (Gus) Fricano, founded what is believed to be the first pizzeria in Michigan, Fricano's Pizza Tavern, in Grand Haven with the original thin crust pizza pie. 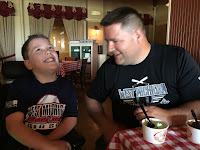 The pizza is a family favorite, although Cam is still quite puzzled why they don't serve breadsticks at most of their pizza establishments.  A definite bonus regarding the Muskegon location is that a specialty ice cream shop is downstairs in the same building.  Cam believes this may outweigh the breadstick issue. 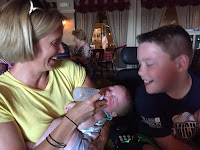 The biggest bonus, though, is hanging out with our cousins we don't see too often due to distance and knowing that the next generation will be surrounded by family, friends, baseball, and of course, Fricano's pizza!

Camology Quotes:
Cam loves school and has always enjoyed summer school too.  The summer program lasts 5 weeks and Cam rides the bus there 3 days per week in the mornings only.  Cam's class worked on an ocean theme and even cracked open coconuts one day. 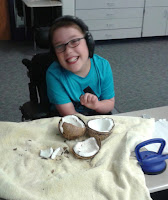 As parents, we hope our children are polite when we are not there to remind them to do so.  Jane received this email from Cam's summer school teacher, Ms. Kathy, on the last day of summer school this week.

"I also want you to know what a lovely and polite boy you have.  He thanked us all for having summer school and making it fun!"
Posted by Special Moms at 9:58 PM