"The man who can keep a secret may be wise, but he is not half as wise as the man with no secrets to keep." ~E. W. Howe

Monday was the official birthday for Cam's dad.  Cameron had helped Jane pick out a new hammock for Chris on Amazon.  It was delivered on Monday while Chris was at work. 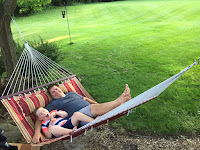 Cam had known about the gift for almost a week and kept it a secret.
But when Chris arrived home from work and we announced he should open his birthday gift, Cam asked if he knew what it was. Chris indicated he didn't to which Cam gleefully told him, "It's a new hammock for you, Dad!"  Of course he had no idea what it actually looked like until he opened the box. We took Chris out for a tasty dinner at the Cascade Roadhouse and followed it up with a relaxing evening in the hammock.

Miss Amanda and Cam keep themselves busy on a daily basis with new adventures and activities.
One day, they went off-roading on some park paths and discovered that Cam's chair can definitely get stuck (but also unstuck too!) as they explored new areas. Our brave boy told Amanda, "I am a hiker!"

After completing school work and reading, there's still time for the occasional baking.  Occasional because daily would fill our home with far too many sweets.  Most of this brownie batter actually did make it into the oven, according to Miss Amanda and her partner. 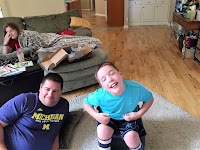 Cam has been hard at work with a new physical therapist he sees weekly.  She's given homework and our studious boy is adamant about following through with his assignments.  Sitting for a period of time on a stool by himself is one such task. 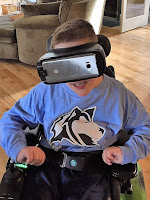 When you're a part of a technology family, chances are, you will have an overload of techie toys.  Chris brought home a new virtual reality headset for us all to test out.  Cam summed up our collective thoughts perfectly with the comment, "This is pretty cool!"

Chris and Cam ventured down the driveway to check the mail Sunday evening.
"Maybe we should go to the end of the road, Dad, in case the ice cream truck goes by."
At end of road, Dad announces... "Ok, let's wait for 5 minutes."
"Maybe we should go down Emma's street, Windcrest."

Chris and Cam talked to our Windcrest neighbors and asked each if they had seen the ice cream truck, but they hadn't.  They stopped at Papa's house and asked him as well.  Mom came by with the van (since it was getting late) and picked up the boys to head home.
After discussing the events with Mom, Cam announced to his parents,
"I wish there was an app that would tell you when the ice cream truck is coming to your street!"
Posted by Special Moms at 11:11 PM