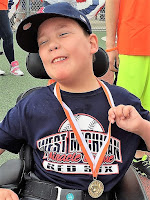 "Every new beginning comes from some other beginning's end" ~ 'Closing Time' Lyrics, Semisonic

When we enter into the month of June, activities wind down and teachers begin sending home projects from the school year.  On Friday, Cam's parents were honored to attend the awards ceremony for Project Unify.  The LINKS (Loyal, Interested, Nurturing, Kind Student) program at Meadow Brook connects kids of different abilities and needs.  This year, over 100 kids participated!  What an amazing group of young students.  The assembly included a slide show. (click here for the 8-minute show)  Each participant was called to the front and given a medal.  Certificates were presented in their classrooms. 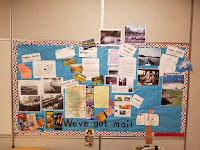 Before Cam's parents left school, they caught a quick peek at the "We've got mail" display which proudly showed all of the information gathered from loved ones across the country.  Thanks again for representing Kansas, Grandma Sue, and for being the first one to respond!

Saturday morning, we were ready to head out early to the ball field.  Oma arrived at our home to catch a ride with us to Rockford.  On the day of Cam's last WMML spring season, we had picture day and lots of Cam Fans scheduled to attend.

Although rain threatened, it held off for the ball players and Home Depot volunteers, not to mention the crowd of folks there to watch.  It was a great game and our 9-year-old used the awesome batter box again before taking off to round the bases. 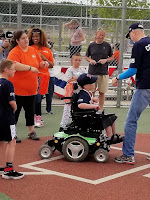 Cam was so surprised to see everyone who came out to watch the ballgame...teachers Ms. Kathy and Ms. Barbara, Ms. Kathy's husband, Kevin, Cam's bus driver, Dick and girlfriend, Marie, lifelong friends-Mr. Steve & Patti, Aunt Joyce & Uncle Joe, Aunt Betsy & Uncle Jon, Aunt Gay and of course, Oma.
Coach Bob placed WMML Spring Season 2017 medals around every Red Sox player.
Since our team had the first game at 10am, Cam was relieved that the Home Depot hot dogs were still available.  Almost every year, his team plays last and the delicious dogs are usually gone by then.  Home Depot not only volunteers their time to help the kids, but they also donate the food for the last game of each season.  We are always overwhelmed by their commitment and contribution to the West Michigan Miracle League! 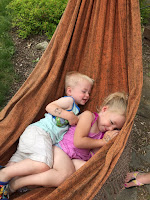 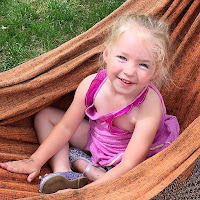 Saturday afternoon brought our dear friend, Amanda and her two kids, Sally and Henry from Ann Arbor.  It had been almost a year since we had seen these guys and they were ready for fun!


From outdoors to indoors, the activities continued all day.
Cam was great about sharing his toys and his Oma for part of the afternoon.  Henry, like another boy we know, has a love for cars of all shapes, sizes and colors. 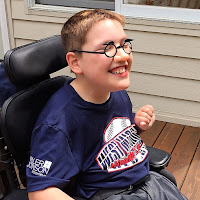 Cam was able to score some giggles with his funny face glasses.
And the parents had a little chuckle and a big yawn when all three kiddos decided that 6am was the perfect time for each of them to simultaneously wake up. Even though they were all in separate bedrooms, somehow they were connected by an internal alarm clock.

Chris and Cam discovered an 'Alexa' project to work on.
'Alexa,' Amazon's virtual personal assistant, has been a part of our home for almost two years, and it keeps getting smarter.  It lives inside the Amazon Echo smart speaker and offers users the ability to dictate commands to the assistant to control products throughout our home, listen to music, and more. 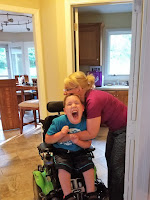 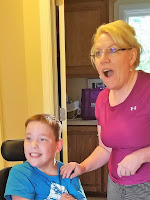 The boys read that they could input some code so we would be able to ask 'Alexa' to open and close our garage door.  It turned out to be an arduous task.

Chris had exhausted almost all possibilities and Cam kept saying, "Dad, don't give up!"

Jane had no idea the boys had cracked the code when they asked her to come and see something in the garage... Chris gave Alexa the command and suddenly the door opened!

Jane was so excited and Cam exclaimed "Mom, isn't it amazing?  It is so cool!"

Technology certainly has come a long way.  Some of us might remember having to open and close a garage with only our sheer strength...imagine that!