There is always safety in valor. ~Ralph Waldo Emerson 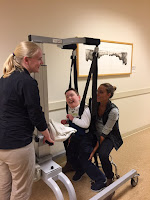 On Lake Michigan, we definitely see some pretty amazing sunsets in the summer.  It takes us by surprise, though, when we see the colorful sunrise from our home in Grand Rapids.

Cam continued his work effort at Grand Valley this week, testing out a walking apparatus with Miss Katrina and Miss Kelcey.  They almost started a dance party in the hallway with some fellow GV students waiting for a classroom to empty out.

Typical of most weekends, Cam anticipates what he can help with.  Chris regularly thinks up the coolest projects to work on with his son.  Before any assistance can begin, Mom or Dad always ask if there are any helpers around who would like to volunteer.  Inevitably, Cam excitedly raises his hand each and every time. 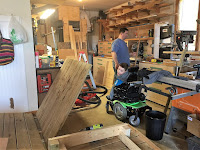 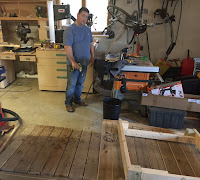 After borrowing a concrete drill, lots of sawing and pounding, and keeping Jane out of the garage, the boys were ready for their reveal...a walkway that transforms into a ramp!  With new hinges, a removable platform and a lot of ingenuity, Chris figured out a way for his son to drive directly into the workshop.  Cam has taken on the role of being a safety supervisor, making certain that all precautions are taken before performing any construction task.  Jane contributed a couple of laminated signs for the area to warn others of the guys working. 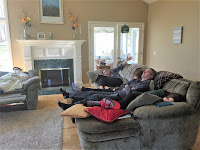 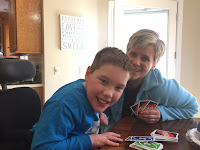 With March Madness in full swing, the Raisch family joined us for lunch on Sunday to take in a few basketball games and grill some burgers, complemented by homemade french fries.

While Patti, Cam and Jane played a few games of Uno in the kitchen, the rest of crew "watched" basketball in the living room.

On Sunday, we talked to Cam about an upcoming hospital procedure he will have on March 28th for right hip dislocation.  We explained that since his right leg has been hurting at times and x-rays showed that his hip socket is not where it should be, he will need surgery.  After an extensive discussion with questions from Cam, he announced:

"Ok, I will not cancel the surgery."
Other questions included, but were not limited to...
"When do I eat? Why do I not get breakfast?
How many visitors? What are the hours? Can I have too many?
"Oma knows about this- she had knee surgery."
Posted by Special Moms at 11:50 AM