"Doing what's expected of you can make you good, but it's the time you spend going above and beyond what's required that makes you great!" ~ Josh S. Hinds
What you do speaks so loudly that I cannot hear what you say" ~ Ralph Waldo Emerson"

As a nine-year-old, Cam receives quite a bit of mail.  Cards arrive for holidays and birthday as well as letters from Oma and Auntie Karen. 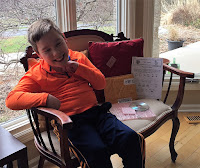 The majority of Cam's mail, though, comes from the state of Kansas with the return address of Grandma Sue.  Chris' mom moved to the Plains state a few years ago from Arizona and spends her days caring for her farm.
A little over a week ago, Cam arrived home from school with a project.  He had to send a self-addressed stamped envelope to someone he knew outside of Michigan, preferably a state that wasn't close by.  Once that person received the letter, they were asked to provide some facts about their state and city as well as some unique things. Cam's first request was to send it to Grandma Sue.  Little did we know she was an overachiever and created a CD for Cam's class to see.  Since it was delivered to school on Thursday, the class viewed it on Friday and Ms. Kathy even included the story in the newsletter that went home!  Many, many thanks Grandma Sue! 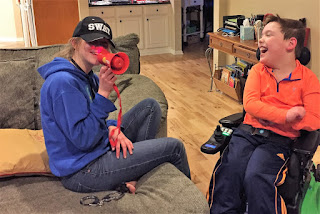 "At the end of February we sent letters home to go to other places.  We got a letter back today!  It was from Kansas.  We learned about a farm.  They had chickens and it was on a river.  We learned that they have tornadoes in Kansas.  It was fun to learn about another state.  This makes our class feel excited."

Most weekends, we see our buddies and this one was no exception.   We had a fun, impromptu outing to Culver's with Emma and Mr. Steve.  And Emma outdid herself by not only getting into police mode, but also sporting the S.W.A.T. cap and handheld siren. 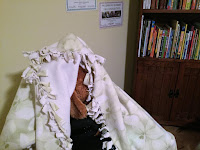 Some classics fade and come back.  For our family, hide-n-seek has been one of these faithful games that Cam still gets a kick out of.  It seems when he involves his parents, it takes a different turn.
Chris always like to throw Jane off the trail, so a large stuffed animal was hanging out in Cam's chair with a blanket over its head. 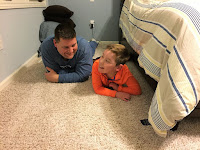 Dad and son were on the floor in the dark room waiting to be found.  It may have taken Mom a bit longer to find the boys if there hadn't been giggling emanating from that area.  When the lights came on, Cam explained the lengths they had gone to for the perfect hiding spot.

Jane and her son found another quiet place in the corner, throwing Chris off of their trail by placing pillows under the bed. 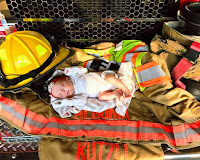 Our good friends, Chris & Cassie, brought their premature daughter, Cora, home from the hospital after a month's stay.  We attended their baby shower on Saturday.  Both Chris and Cassie are firefighters.  Cam was quite intrigued with the event location and fired off (pun intended) many questions during our trek there.

"Where is the baby shower?"
It's at the fire station.
"Wow! What happens if they get called to go out?" "Where would baby Cora go?"  "Will we hear the siren?"  "Who did they ask if they could have the baby shower there?"
Posted by Special Moms at 10:33 AM