The Art of Our Community - Week of Oct. 3rd

Art is not what you see, but what you make others see. ~Edgar Degas

As adults, some days at work seem so serious.  The adult community may want to take some cues from elementary students.  This week Cam participated in "Wacky Hair Day" at school and experienced quite a few laughs throughout the day because of it.

The city of Grand Rapids was winding down its eighth year of Art Prize which has become recognized as "the most attended public art event on the planet" according to The Art Newspaper.  To do our part as members of this planet, Amanda and Jane transported Cam downtown Friday afternoon to take in at least a portion of the art.  The trio toured The Gerald R. Ford Ford Museum where they saw the Sand Sturgeon.  The sand painting was on a platform 4ft x 16ft x 32 inches tall. “Sand Sturgeon” evolved from the artist's large scale photographs and drawings of fish he caught and released.  Upstairs in the museum, Cam liked a rug that appeared to be melting. 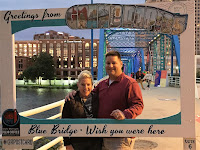 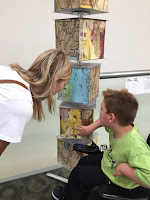 The inquisitive nine-year-old determined his favorite piece of art, however, was one in motion.  The artist was Jonah Ortiz and the piece was named "Human Hoop."  The kinetic sculpture captured Cam's interest for quite some time.
Another creation Cam liked allowed viewers to feel the different textures of the pieces and spin them around to see things from a different vantage point.
That evening, Chris and Jane ventured back downtown and found themselves literally in the middle of art, while Amanda hung out with Cam back at home.

Saturday marked the final day for the WMML Fall 2016 season.  The helpers on the field were from one of our favorite stores, Home Depot.  It was quite a chilly morning but the sun was shining and the fans were in full force!  Cam thought it was downright hilarious that his helper's name was Sam (Samantha) due to the natural rhyme of their first names.

Cam's friend and bus driver, Mr. D (Dick) arrived with his sweet friend Marie and dog, Molly.  Aunt Mary and Uncle Ray braved the cold to cheer on Cam as well.  Of course, Oma and Opa told their grandson there was no way they would miss his last game!  After a great showing and one too many pictures (according to Cam), the family headed to Logan's and treated Cam's grandparents, in thanks for the many trips they made this season, and every season!

Saturday evening we shared a delicious meal with our awesome friends, the Raisch fam, and we were excited to have Anna with us too, home from Hope College.  Cam has been missing seeing her on a regular basis and when she comes over a visit, she has "celebrity status" with her buddy.

May your day be filled with some wackiness and unexpected art :)

Cam and his dad have been busy with Halloween requirements for Cam's "costume" which may include but are not limited to different noises to be used for sound effects.  The two ran into a few snags with some computer software.  A conversation Jane overheard...

This child definitely has a future in network computing...
Posted by Special Moms at 12:07 PM