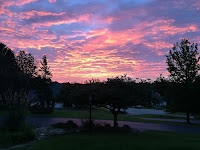 The talent of success is nothing more than doing what you can do well, and doing well whatever you do without thought of fame.  If it comes at all it will come because it is deserved, not because it is sought after.  ~Henry Wadsworth Longfellow

Becoming independent.  It can happen on a singular level or with the help of a friend.  At Cam's school, he was the teacher's helper for the week.  One of the tasks is taking the lunch count to the front office.  Because Cam needs help opening the door, a teacher would normally accompany him. This time, the request was for his buddy Brody to make that trek with him.  Ms. Kathy followed, undetected, to sneak a few pictures.  The two pals chatted along the way and maybe both felt a bit more independence upon their return, or maybe they just enjoyed the company. 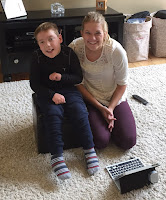 Cam also worked on sitting solo at a stool in the living room, one of his daily tasks after school.  His check list includes homework and exercises, both of which he happily agrees to nearly ever day...after a snack.

Most weeks are filled with activity for our family.  The last month, though, has also had a focus on the community.

A longtime family friend, Molly Krauss, reached out to us a few months ago asking if we'd be  interested in taking on a project to help Mary Free Bed Rehabilitation Hospital during Halloween. Molly receives our Christmas card annually and each one has shown Cam's costume.  Molly had the idea of having us (Chris) help create costumes for inpatients at Mary Free Bed who wouldn't otherwise be able to participate in Halloween fun.  We jumped at the chance!  As the project has progressed, so has the Mary Free Bed Marketing team.
On Tuesday evening, we received quite an exciting phone call requesting our presence on a local television show that would be taped and shown Friday morning.  When we asked Cam if he was willing to go with his, he asked "Will I be famous?"  "Not so much," responded his parents, "but it would be fun to see yourself on t.v.!"

Cam's T.V. Debut! (click the link and then the play button) 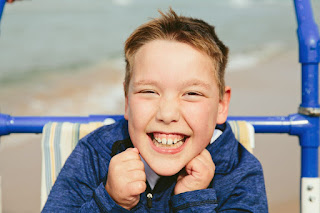 Friday morning, we packed up Cam and his costume for its official debut, complete with lights and sirens!  Before we entered the building, we found Molly and after she said "hi" to Cam, he said "I'm excited to see how this turns out!"  The studio was busy and we didn't have to wait long before it was our turn to chat with Terri DeBoer.  Before our interview began, she told Cam he might like to work at a television station when he's older.  The starstruck boy was fascinated with the robotic cameras that wheeled around by remote control.  Even though he wasn't able to show off his speaking skills during the interview, he chatted during the entire drive back.  Our nine-year-old was only an hour late to school and even had the pleasure of watching himself live on t.v. in his classroom!

To add to the week's excitement, we received our beach photos from the Gauper photo shoot.  The pics were quite timely since we were able to send them to WoodTV to use for the interview.  And maybe we're a bit bias, but we do think Cam is pretty photogenic!

Camology Quotes:
Cam's parents told him they wanted to take him out for dinner Saturday night to celebrate being on tv. 3 options were given: Bagger's Dave, Pizza Hut or Olive Garden.