Cool Events in our Community - Week of Oct. 12th

"Autumn is a second spring when every leaf is a flower." ~ Albert Camus

As Winnie-the-Pooh would say, "it was a very blustery day, or rather, weekend!" 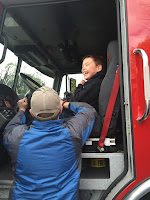 On Friday evening, we were invited to attend a community event co-hosted by our Katherine (aka Ah-Dah).  The Block Party intended to bring members of the area together to learn more about HQ, a runaway and homeless youth drop-in center.  Food items were donated by different restaurants, there was a craft table, pet goats, and lots of hungry people.  The food went quickly and since we arrived later than expected, we grabbed some pizza at a local spot nearby.  Cam was a trooper without complaint, but definitely didn't feel the need for a photo opp while dining.


On Saturday, we ventured over to Sparta for the first annual Fire Prevention day organized by Katherine's brother, Christopher.  There were fire engines to explore and sit in.  The firefighter even let Cam blow the loud fire horn! 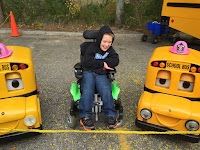 One of the highlights was meeting "the buses" that were actually robotics-controlled.  Dean Transportation volunteered their time and hilarious drivers who provided 'the voices' for the small buses.  "Buster" kept asking Cam if they could race and told him that they wanted to come home with him.  He thought they were so funny! 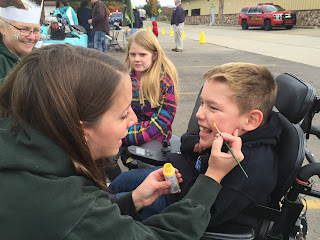 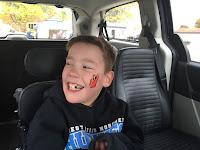 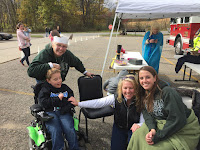 Of course, the biggest event was the face-painting area that Ms. Ann and Katherine were in charge of.  After inquiring what Cam wanted painted on his face, he choose flames, which made sense since he was surrounded by fire trucks. 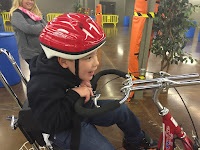 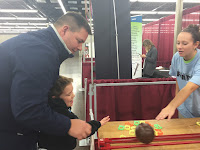 From Fire Prevention to Fun Fest, we drove from Sparta to the DeltaPlex arena to participate in 2nd annual Special Families Festival.

Cam was able to try out a new bike and exercised his legs quite a bit, pedaling around the track four times!  There were quite a few games set up with silly prizes for the kids.  Chris and his son practiced their bowling skills and Cam's prize (that he chose) was a notepad to be used for taking planning notes with his dad. 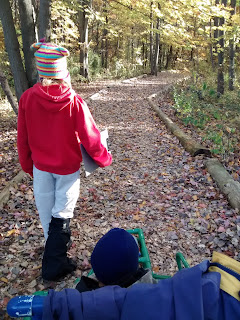 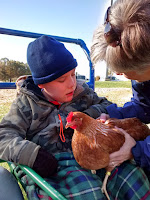 While Chris and Cam were taking a break from some building designs on Sunday afternoon, Patti and Emma stopped over to see if Cam was available.  Emma needed to practice her trail guide skills as part of her homework for Goodwille Environmental School.  The school she attends for 5th grade is built on 28 acres and incorporates using the outdoors as a motivation for learning. 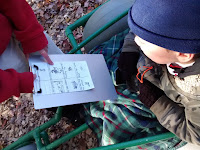 It was such a pretty, sunny afternoon for Patti, Emma and Cam's adventure.

Cameron had the opportunity to pet a chicken and go on his first official hike.  He listened to Emma explain what they were seeing as they ventured along.  She had created a guide to be used for their hike and quizzed her buddy with questions along the way. 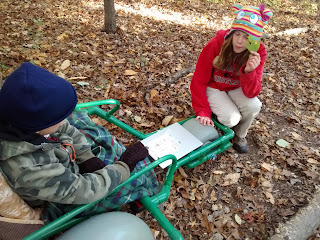 Many thanks to Patti and Emma for asking Cam to join them!

"I have never been on a field trip on a Sunday!  This is a new thing for me."