“There are no bad pictures; that's just how your face looks sometimes.” ~ Abraham Lincoln 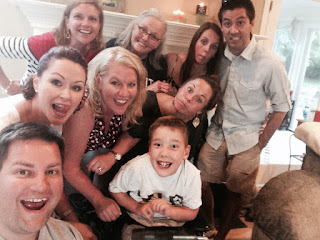 Cam is always up for trying something new. Today's trends include using a selfie stick for capturing everyone in a photo.
Although a silly item, it does come in very handy when taking group pictures! 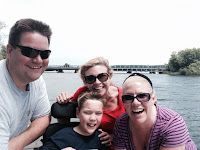 Friday night was just the occasion to partake in some fun as we hosted game night that evening with Katherine & Paul, Molly, Ms. Ann, Ronda, and Leslie.  'Auntie' Leslie had arrived from North Carolina that day and jumped right in with the crowd!  Cam played a little Catch Phrase and Hollywood Game Night before heading to bed...quite late.

On Sunday, we ventured north, anxious to go swimming.  We stopped for lunch at the famous Dog-n-Suds in Montague.  You can order from your car 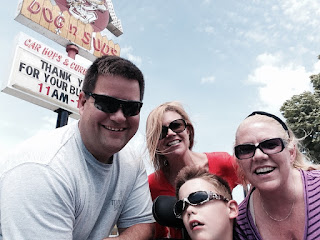 and they bring your food out to you, although it appears roller skates are a thing of the past for the waitresses.  We were pleasantly surprised to discover there was a ramp so Cam could drive down by the water.
Apparently, by this point, we had exposed Cam to the selfie stick one too many times as noted by his "I'm done" expressions in the pic. 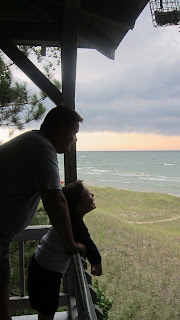 We finally arrived at Oma and Opa's and scooted right down to the beach.  The lake was rough and Cam stayed on shore playing in the sand with Oma while the Chris, Jane & Leslie swam.  The undertow was incredible as you felt yourself fighting to walk in the water just a few feet.  Cam felt the warm water when Chris held onto him and kept him close to shore. 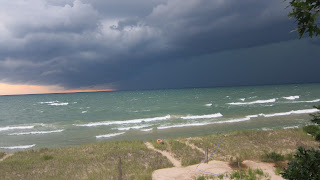 After a delicious dinner, we noticed the sky darkening.  If you've never seen a storm roll in over Lake Michigan, it is quite a sight to see.  Pictures cannot do it justice.  Cam kept saying "wow- look at the clouds!"  They were moving so quickly and their color deepened as we all watched in wonder.  The storm only lasted an hour, but provided a lightning show like no other.  Chris captured a bolt in the pic below but the way it kept streaking across the sky was unbelievable.

As the rain pelted and the wind whipped, we were happy to watch from indoors.  As intense as it was, the storm moved out completely along to the south and slowly, the sun returned to the sky.
Even though there were various beach toys scattered about and some clean-up to attend to, the storm seemed to have awakened the sky.  The brightest sunset we've witnessed this summer graciously appeared, waiting for its selfie... 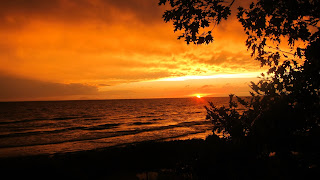 Sunset is still my favorite color, and rainbow is second. ~Mattie Stepanek
Posted by Special Moms at 12:44 PM