Cameron has seen his Oma (Jane's Mom) nearly every week since he was born.  Oma has driven in to spend every Friday with Cam and it seems that each week, Cameron begins asking about Oma's visit, oh... around Monday! 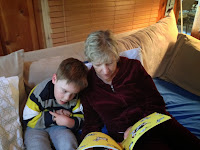 Since our family has been busy with activities, including travel, the weekly visit has been sidelined.
And, as it turns out, Oma needed a knee replacement and scheduled it for the beginning of October. Cam and his parents drove up north to prove to Cameron that we weren't keeping him away from his Grandma on purpose. 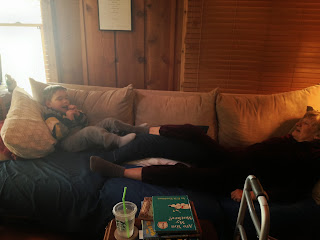 The most interesting part of the visit for Cam was checking out Grandma's ice machine for her knee.  He had to have his knee elevated as well and try out Oma's cool contraption.  We were all quite impressed with her progress!
Even though Cam's buddy couldn't play on the floor with him like she normally does, he was perfectly content playing with blocks on the couch and reading books with Oma.  After all, sometimes the best moments are based upon those we are with versus what we are doing.

Cam has been quite busy making friends at his new school and was excited to receive a birthday party invite from one of those new friends, Gracie.
Gracie's birthday party was held at Gymco, an indoor gymnastics arena for kids.  Not only did Chris and Jane meet some of Cam's friends from school, but they also met many of the parents. 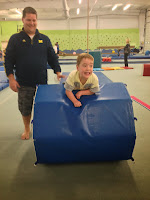 A favorite activity to try out was jumping on the multiple ground level trampolines, some of which had plastic balls scattered around.
Although we took quite a few pictures of the fun, most were quite blurry due all of the movement!

As it turns out, we're not quite sure if you walked in on the birthday scene, if you'd be able to determine who was having the most fun- Cam, Chris or Jane!  Cam's parents sure do hope they're invited to the next kid party!! 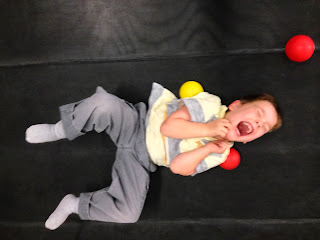 Posted by Chris Weatherford at 11:05 PM