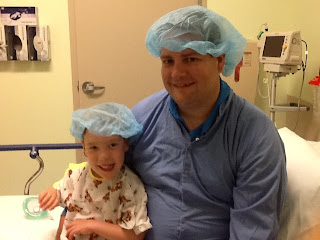 Ear infections have been quite frequent for Cameron in the last few years.  He was referred to an ENT (Ears, Nose, Throat) specialist a few months ago who checked Cam's adenoids and tonsils.  The specialist found that both of them were quite large and may be causing the ear issues.  Surgery was scheduled for June 24th.

The day of surgery, Cam couldn't eat anything and could only drink some water a couple of hours before the procedure.  Surprisingly, he was very cooperative about the entire ordeal.  Because they had to give Cameron anesthesia, we asked him which parent he wanted with him and he chose Dad (although he did say Mom first, but ended up saying Dad in the end...)
The surgery itself only lasted about 30 minutes!  Cam's specialist wanted him to spend the night at the hospital (with his parents) just to be certain he was doing alright before going home.  Cameron was a bit upset after waking up, due to his throat hurting so much, but after a few hours, he wanted to try to eat.
Staying in the hospital was much more fun with visits from cousins Coco and Libby as well as Katherine and Paul, Ann and Molly.
In his first week of recovery, Cam was pretty impressive.  Ready to try crackers and mac-n-cheese the first day he was home, he stayed hydrated and took all of his medicine without complaint.  While in the hospital, one of our star patient's nurses had told us that the medicine he had to take every 4 hours tasted absolutely awful.  Although his facial expressions told the story of how badly it tasted, he really was a champ about taking his meds.

To help in recovery, Cameron received quite a few gifts including Curious George activity books, lots of books to read, and a Curious George beach discovery set and magnets.  Cam also had a very special visitor- his teacher from school, Ms. Kathy!!  She brought get well cards that each of Cam's classmates made and a book that all of the teachers from Cam's Wellerwood School had signed...his very first yearbook!

Later that same day, Cameron played the role of supervisor for homemade strawberry jam making.  We do hope it lasts through most of winter!  A huge thanks to Katherine and Ann for all of the heavy lifting with the strawberry goodness.
Cam sends a big thanks for the unexpected get well gifts from Oma and Opa, Aunt Joyce and Uncle Joe, and Cam's bus driver- Ms. Marci.  We also couldn't have made it through recovery without Katherine and the Raisch girls!
Posted by Chris Weatherford at 9:19 PM