“Eventually, all things merge into one, and a river runs through it. The river was cut by the world's great flood and runs over rocks from the basement of time. On some of the rocks are timeless raindrops. Under the rocks are the words, and some of the words are theirs... ~Norman Maclean, A River Runs Through It and Other Stories

It was a record-breaking week for rainfall and flooding in Cameron's hometown of Grand Rapids, Michigan.  In fact, it felt like we went through all four seasons in a 24-hour period!  On Saturday morning, we had snow on the ground, but it was gone by that afternoon.
Cam's buddy, Emma, came over to play and we all decided it was time to check out some of the nearby flood waters...
In less than 5 minutes, we drove into the village of Ada and were detoured due to flooding across the roads.  We stopped to walk around by the town's baseball field- you can see the scoreboard almost "swimming" in the background.  Some funny people posted a sign "Don't Feed the Gators" and even anchored two plastic inflated alligators in the flooded ball field.

Next we drove around the corner to see our favorite homemade frozen yogurt place, Spoonlickers, except...the road to that was flooded too!  The actual entrance to Spoonlicker's is at the pine tree on the right side of road!  On our drive out to the nearby town, Lowell, we saw farms that were flooded and livestock congregated in one small area that wasn't covered by water.  A portion of the main street in Lowell was completely closed due to impassable roads. 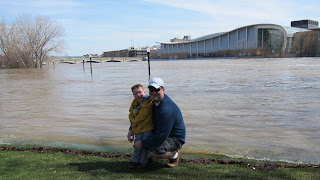 Sunday afternoon, we took cousin Coco and ventured downtown to check out the Grand River, which runs right through the heart of our city.  In front of the Gerald R. Ford Presidential Museum, Chris and Cam are standing at the water's edge...however, the water isn't supposed to be there.  Behind them is a set of lampposts that are normally on land with a walkway for pedestrians.
The sun was shining brightly and it felt like spring to all of us.  Many other residents were out walking around downtown and quite a few had volunteered to fill sandbags, most of which, thankfully were 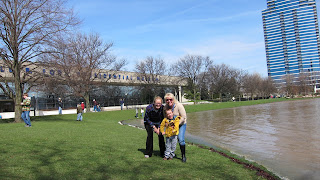 On our way back home, we stopped once again in Ada and Chris took Cam high up over the river on the train trestle.  As always, Cameron, the adventurer, had no fear, and happily yelled "hi" to his Mom and Coco from up above. Even with roaring water, Cam could still be heard!   Jane and Coco made it up to the track, but felt content to stay on land.

It was an exciting and historic week, complete with Kindergarten Round-Up for our son!  Stay tuned to next week's blog for the inside scoop on Cam's school adventure...


Posted by Chris Weatherford at 2:30 PM