Cameron's school had a special dinner just with Dad on Thursday evening. Cam & Chris had a 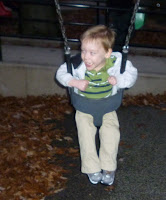 great time sitting with Cam's classmates, their Dad's, and some school helpers. After dinner, some playground swinging rounded out the

evening.
The Yankees didn't do enough swinging this week to make it into the World Series. But cousin Coco and Cam had fun watching the game anyways....
One of this week's highlights was a trip to Robinette's to pick out some

pumpkins for Halloween! With so many to choose from, Cameron settled on a bumpy pumpkin that made him giggle when he touched it. Chris

and Jane found an orange one each to carve later as well.
Before leaving

Robinette's, the family had to partake in some silliness... and Cam discovered that he loves being showered with fall leaves!
Next week's blog...here's a Halloween costume clue...
"Who is cooler than the Fonz, but laughs so much more,
Gives the biggest hugs of all, and is not even four!"
Posted by Chris Weatherford at 10:44 PM