In mid-June, we received an exciting email from the West Michigan Miracle Baseball League president, Tony Comden.  He was inviting Cam and 4 other WMML players to the Detroit Tigers Fantasy Camp in Southfield, MI on Saturday, July 20th.  It was quite an honor.  Other Miracle Leagues players from across the state were also being requested.  Overall, the invitation was going out to 50 individuals!  We were asked to sign waivers and provide Cam's shirt size.  When Cam found out his best buddy, Brody, was invited too, he couldn't wait.

On Friday, the night before, we were all awoken to a severe thunderstorm.  Jane realized the power went out about 1:30am and created an outage incident online.  Saturday morning, the electricity was still out and we were just starting to realize the extent of the damage.  When Brody and his dad, Bill, arrived before 8am to make the trek with Chris and Cam, they explained how the roadway to Ada was completely blocked due to downed trees.  Even as they drove out to Cascade road towards the highway, the thunderstorm damage was visible everywhere. 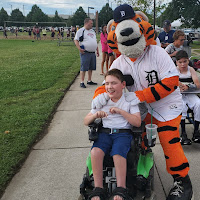 The guy group of 4 arrived right on time.  Cam and Brody received their personalized Detroit Tigers jersey and a baseball cap!

The objective of the Fantasy Camp: To provide youth with special needs the opportunity to learn and play the game of baseball by participating in a one day clinic hosted by the Detroit Tigers Foundation, an affiliate of Ilitch Charities. Similar to major league fantasy camps and clinics, the Baseball Fantasy Camp for Kids gives youngsters with physical challenges the opportunity to improve their baseball skills by receiving instructions and tips from major League Baseball players. 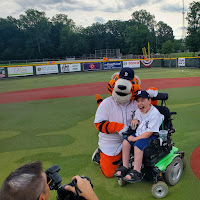 Cam told his dad that the best part for him was meeting "Paws" the Tigers mascot and going around the bases. 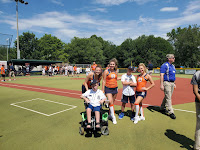 By the time lunchtime rolled around, it was extremely warm and the boys decided an air-conditioned restaurant for lunch needed to be added to their agenda!  To top off their 'adventure' day, they ran out of gas just a few miles from home since the gas station off of the highway had lost power!  Jane drove to meet them with enough gasoline to make it home. 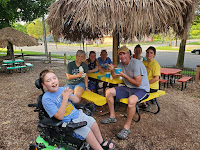 Thankfully, the power at our house was back on by 1pm on Saturday, long before the boys arrived.
On Sunday, Jane drove to the Chicago area to be a part of a surprise party for Auntie Karen.  Cam and his dad went to see Secret Life of Pets 2 at the theater.
That evening, Chris and Cam hosted the Raisch's for dinner.  Since it was National Ice Cream Day, it seemed only fitting to walk to the closest ice cream place for an after-dinner treat! 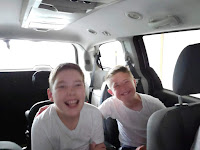 Camology Quotes:
On Saturday, the guy group ate lunch at TGI Friday's near Southfield.  That evening, Jane was asking the boys what they had to eat at the restaurant.  She assumed Brody had a cheesburger, since she knew it was his favorite.  Cam was eager to tell his mom...

"Funny story.  Brody's doctor told him he cannot have multiple cheeseburgers every day anymore!  Only one cheeseburger a day."
Posted by Special Moms at 8:35 PM