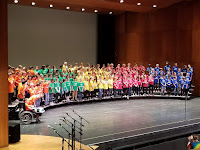 "When all else fails, take a vacation." ~ Betty Williams 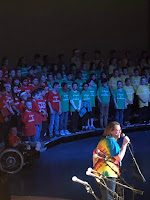 A big stage in an auditorium can conjure up excitement, nervousness and anticipation.  On Wednesday, we were cordially invited to attend the 5th grade musical entitled "I Need A Vacation!"  represented by the students wearing t-shirts with the same sentiment.
Cam was stage left and contributed his singing and participation.  The colorful crew of fifth graders put on quite a show for 35 minutes. 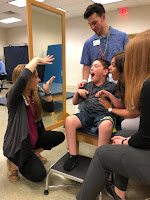 Upon exiting the auditorium, so many kids greeted Cam and his buddy Gerrit stopped too.  "I kind of feel like a star!" said our super happy son.

Friday afternoon, Cam was back to his paying job at Grand Valley State University where he met with 3 PT graduate students. Their mission was to work on stretching and sitting since Cam's legs have been in a straight position for quite a few weeks due to the stabilizer pillow.  They were successful in their distraction techniques and the sitting time was so good for his leg muscles.  Dr. Lisa always asks "Professor" Cameron for his feedback.  He declared his students received an "A"for their time with him. 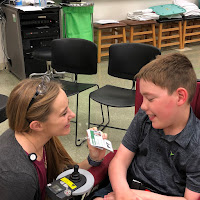 In addition, a previous student who worked with Cam, Miss Janae, appeared to surprise her buddy.  Janae is now graduated and working at Mary Free Bed.
She had to show her official MFB badge to Cam as proof!

Saturday morning was a bit chilly for baseball, but we bundled up and headed to the Miracle League in Rockford.  Oma and Opa were waiting for us and ready to brave the weather.  Ms. Patti arrived to cheer on Cam and we were also surprised to see Mr. Brandon (Lakeshore Barrier Free) and his wife, Erin.  Brandon and his company remodeled Cam's bathroom a couple of years ago and he's volunteered for our Halloween wheelchair costume building.

Oma and Opa came back to their grandson's house for lunch and had some time to play a round of the 'Guess Who' game with grandma.
Next up was Brody's birthday party at Sky Zone, an indoor trampoline park.  Cam couldn't do any bouncing due to his hip, but it's always fun to hang out with friends.
As a chocolate cake connoisseur, Cam declared Brody's cake was 'very delicious!' 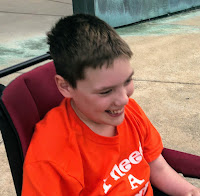